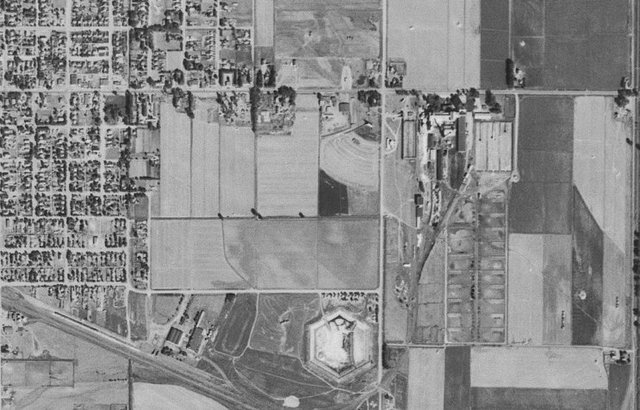 The Biggers Drive-In was opened in 1948. It was operated by Floyd Biggers. It was taken over by Commonwealth Theatres in 1962. Now Reganis Auto Center.

Boxoffice, March 6, 1961: “When it rains, it pours for Floyd Bigger, Bigger Drive-In, Scottsbluff, Neb. Last fall, after their seasonal closing, the concession stand was completely gutted by fire and is now being completely rebuilt. More recently a 75-mile-an-hour wind blew over and destroyed a major portion of the screen tower”

Boxoffice, May 15, 1961: “Floyd Bigger is repairing the screen tower in the Biggers Drive-In, Scottsbluff, Neb. This is the second time this season that the screen has been destroyed by wind”

Boxoffice, Jan. 1, 1962: “Commonwealth Theatres, with headquarters in Kansas City, has taken over the operation of the Midwest, Bluffs and Oto theatres in Scottsbluff, Neb., as well as Biggers Drive-In and Terry’s Drive-In theatres.”