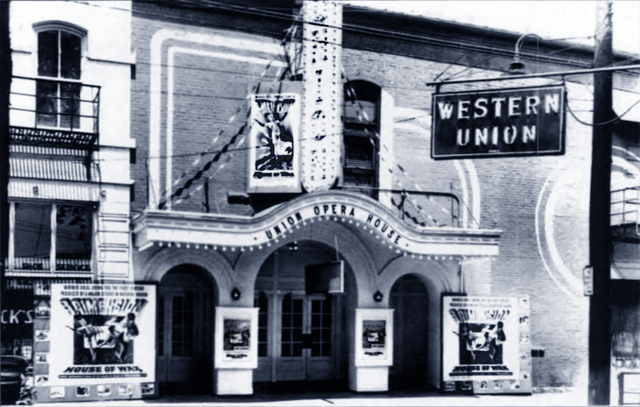 In its live opera house era, Al Jolson and John Philip Sousa graced its stage. The adjoining Reeves Hotel (141 North Broadway) eased plans for traveling shows. Although seen much earlier there, motion pictures became a regular feature for the Union Opera House Theotorium beginning in 1911. Films took over and the venue was renamed the Union Theatre. In March of 1929 it was operated by the Skirball Brothers and the theatre was equipped both with Vitaphone disc-based and Fox Movietone sound systems.

In 1937, in its final 20-year lease cycle the Shea Theatre Circuit hired Columbus architect Harry C. Holbrook to totally redesign the Union Theatre reopening April 9, 1937. The theatre got CinemaScope widescreen projection beginning September 9, 1955 beginning with “Destry” and “Security Risk.” At the end of its 20-year lease, Shea Theatres opted out and the Reeves Hotel decided to demolish the theatre for a parking lot. The last show was a gala event on May 25, 1957 with the fitting title, “Never Say Goodbye”.