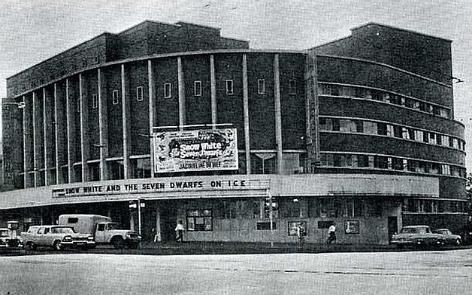 Located on the corner of West Street and Warwick Avenue (today renamed Julius Nyerere Street and Berea Road). The Alhambra Theatre was opened as a live theatre prior to 1894. It was rebuilt in 1922 to the plans of architect Arthur George Cross whose plans were in a Moorish/Atmospheric style. Following a remodel/replacement in 1952, it re-opened with 800-seats on December 31, 1952. It was closed as a cinema in 1963. It became a performing arts theatre, which closed in 1985. It then became a church. By 2017 it is the Durban Christian Centre.

Several sources indicate that the Alhambra Cinema Theatre opened in 1922. It was built for someone called H. Howard, and designed in a Moorish-atmospheric style by architect Arthur George Cross. The building was either completely replaced or radically altered (sources are not clear) in 1952 for African Consolidated Theatres, which had taken over operation of the house in 1927.

The new Alhambra opened with 800 seats on December 31, 1952, and operated as a first run cinema until 1963, when the lease was taken over by the newly-formed Natal Performing Arts Council for use as a venue for live performances. NAPAC bought the leasehold outright in 1970, and continued to use the Alhambra through its 1985 season. After that the theater became a church.