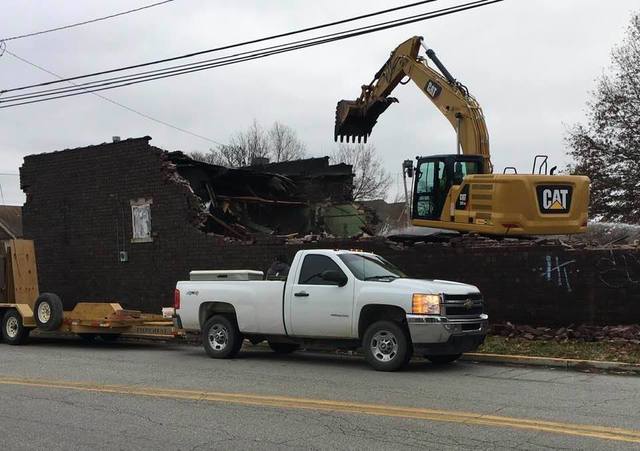 This was a small neighborhood theater that I came across on a Facebook page of if you grew up in Terre Haute. The Rex Theater was located at the southwest corner of the intersection of N. 6th Street (today Lafayette Avenue) and Locust Street. It was opened by 1915. It was closed in the early-1930’s and reopened in 1936. In 1937 it was briefly renamed Annex Theater before returning to the Rex Theater name. It was closed on July 9, 1955 with Bud Abbott & Lou Costello in “Abbott & Costello Meet the Keystone Cops”. It became a Sap’s Donut shop. It was demolished on December 2, 2019.

The Rex theater building is there but no movies being shown. Tom Johnson March 14, 2015 Comment from FB page

I loved going to the serials every sat. morning at the Rex. Ronald Miller, November 21, 2015 Comment from FB page.

I will be 79 next month ..does any one remember Rex Theater on Lafayette …. it had no bath room ..we used the neighbors outside toilet behind the theater… or ran home quickly after the show ,,they had serial movies every Sat and cost a dime…was a tiny place with one isle ..I loved that place when I was a kid .. Barbara Stith-Lawrence January 30, 2014 Comment from FB page

Address listed as 834 North Sixth Street though advertised at North Sixth & Locust Street. Closed July 9, 1955 with “Abbott & Costello Meet the Keystone Cops” with the equipment removed and floor leveled in 1958.

From a Terre Haute FB post today: The former Rex movie theater at the southwest corner of Sixth and Locust came down today. It was one of a few remaining structures that housed neighborhood theaters remaining. I attended scores of movies there in the 1950s. No restrooms, a Coke machine (bottles) and candy. Don Bennett operated the theater and his projectionist booth was in the east end of the building right above the entrance. One center aisle with four or five seats on each side. I don’t know if it was built as a theater, but operated for decades. In the 1960s it became a Saps Donat outlet. It has been vacant for years.

Another one of our historic buildings has been demolished. It was a small and modest building, but had a lot of history behind it. This was the building that was formerly the Rex Theater, and then later Saps Doughnuts, located at 838 N. 6th, at the 3-way intersection of 6th and Lafayette and Locust. I’ve been doing research on old theaters and am glad I took some photos of this building in 2017. It had the letters “REX” still visible on the little side windows. It was the Rex Theater as early as 1915 and operated up to the depression when it closed for most of the early and mid 1930s. Then it reopened in 1936. In 1937 it was called the Annex Theater for about a year and then went back to being called the Rex. It operated up to 1955.