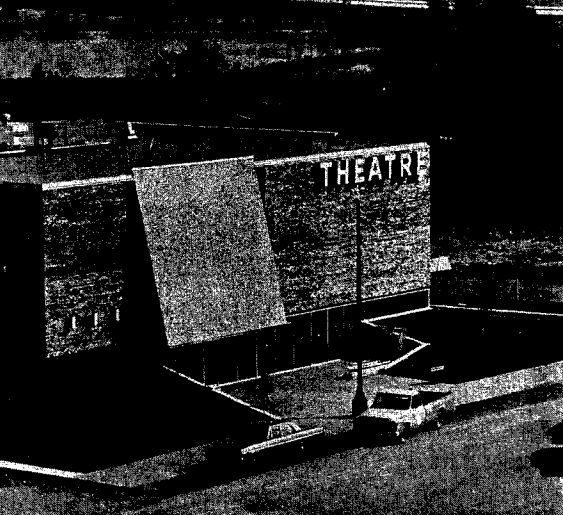 This was a fairly generic theater on the outside that was constructed in 1970 in Palatine. A single screen house that featured first-run films primarily released by United Artists.

The inside of the Willow Creek Theater was simplistic yet elegant with a large lobby and curtains surrounding the entire auditorium.

The real feature was the incredible screen. It was large, curved and the correct aspect ratio was always presented. The sound wasn’t the greatest, as surround sound was never installed. But that great big, bright screen was terrific! First run classics included “Rocky”, “Taxi Driver”, “The Spy Who Loved Me” and “Little Big Man”.

Another feature was the fact that a large picture window allowed the audience to see the entire projection booth. It was a bit of a show watching the oprator loop the film into the two huge projectors. This was before platters and single projection systems.

Later on, the M & R chain bought the theater and split that great auditorium into two generic flat screens on December 17, 1982. This didn’t last long as the Willow Creek soon closed. The building now houses a banquet facility.

On Sundays, a small church began worshiping in the auditorium calling itself the Willow Creek Community Church. They have now grown into one of the largest megachurches in the country, located in South Barrington, IL. They still call their church Willow Creek.

Dates must be wrong, Willow Creek was split into 2 screens in December 1982

This was a Lubliner theater originally.

The M&R Willow Creek Theatres was indeed open much later than 1980. I saw TENDER MERCIES there in 1983.

December 17th, 1982 Grand opening ad as an twin cinema in the photo section.