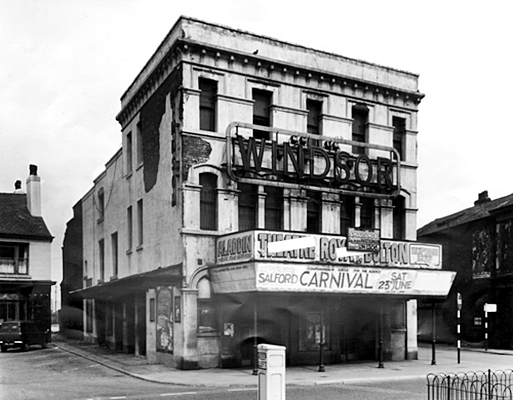 The Royal Hippodrome Theatre was located on Cross Lane between Spring Vale Road & Peel Street and overlooking the Crescent & Peel Park. It was opened on 7th March 1904 and was part of the Broadhead’s Theatres chain. Seating was provided for 1,800 in stalls, dress circle and balcony levels.

Like many variety theatre, it was equipped to show films as part of the programme, but it was essentially a variety theatre throughout its life. W.C. Fields appeared here in 1910. The theatre was sold following the death of William Broadhead in 1931, but it kept its policy of variety shows. Tod Slaughter was very popular here presenting and acting in barnstorming melodramas. Tessie O' Shea, Hylda Baker, Tommy Cooper and Roy Castle topped the bill.

In 1955 a new owner took over and it was re-named Windsor Theatre, but it was closed and demolished in 1962. A 23-storey block of flats named Thorn Court was built on the site in 1969.