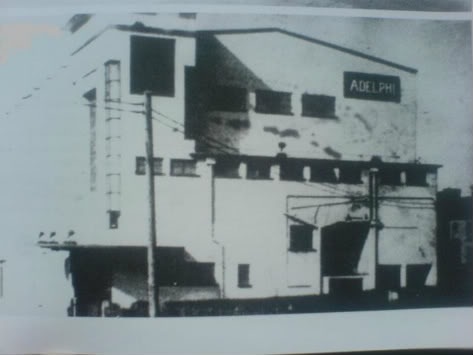 Located in Burry Port, Carmarthen (Dyfd) southwest Wales. The Adelphi Cinema was opened on 11th November 1937 with Alice Faye in “Sing, Baby Sing” and Preston Foster in “We Who are about to Die”. It was designed by Swansea based architect Charles W. Geddes. It was equipped with a British Thomson-Houston(BTH) sound system. There was a large stage and fully equipped dressing rooms.

The Adelphi Cinema was closed in May 1959 and was demolished in 1972. The site is now a car park.

In 1937 Llanelli already had 4 cinemas, so the Adelphi situated just 4 miles away in a minor town was a brave venture. When it opened the management claimed it to be the ‘most modern cinema’ and ‘unequalled in the whole of South Wales.’ Unfortunately for them, they could not have anticipated that during their construction phase, Oscar Deutsch had decided to come west and build a 1,450 seat ‘Super Cinema’ in Llanelli.

The Odeon opened 8 months after the Adelphi and the latter was to be the first competing cinema to feel the squeeze. One by one, the competition closed until by the mid 70’s only the Odeon or ‘Classic Cinema’ as it was then called, remained.