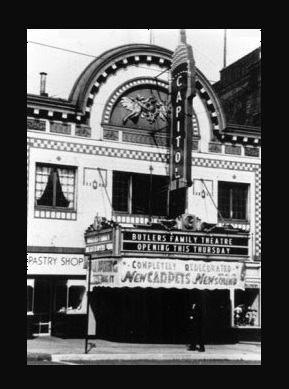 The Capitol Theatre was opened prior to 1930 and possibly closing around 1950. The Brick House restaurant is currently located in the former theatre building.

This web page says that the Capitol Theatre is still intact, and that it occupied the upstairs of the building that now houses the game room and banquet room of the Brick House restaurant.

Looking at the Google satellite view, though, it looks to me as though the “upstairs theater” might be only the former balcony of this fairly capacious house. The upper part of the building alone would not have been large enough to accommodate 900 seats. Quite a large stage house backs up to Jackson Street.

The page also says that the main restaurant and bar next door occupy another former theater, the Lyric, though all trace of that smaller house has been obliterated.

I’ve found the Lyric mentioned in trade publications from the 1910s, but so far not mentions of the Capitol. Still, judging from the facade in the vintage photo, I think the house must have dated from that decade or earlier. Butler had many theaters over the years, and I’ve found references to movie houses called the Imperial, The Carlton, the Grand, and the Orpheum, none of which are listed here yet (unless under later names and missing the aka’s.)