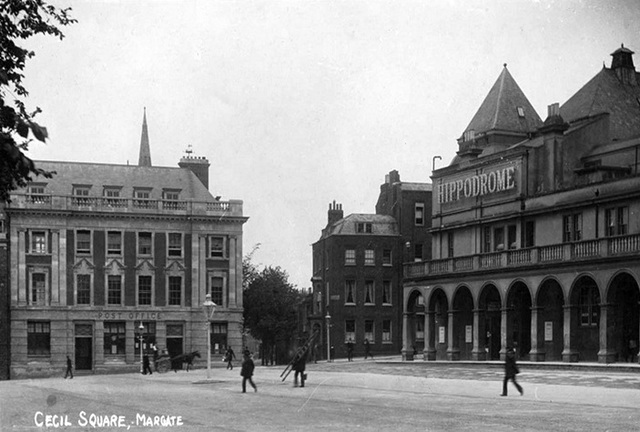 Located in ther seaside town of Margate, Kent. The New Grand Theatre was opened on 1st August 1898 with the play “The Shop Girl” starring Lillian Digges. It was a reconstruction using the original four walls of the former Royal Assembly Rooms which had been destroyed by fire on 27th October 1882. The New Grand Theatre was designed by architectural firm Hope & Maxwell of Newcastle upon Tyne, with interior decorations by Dean of Birmingham. It had a stage 60ft wide and 40ft deep. The proscenium was 30ft wide and there were six dressing rooms. It was later taken over by Walter de Freece and re-named Hippodrome Theatre, becoming a variety theatre. Films were screened as part of the variety programme from the early-1900’s.

In 1929 it was equipped with a RCA sound system and became the Hippodrome Cinema, screening “Bulldog Drummond” which ran for two weeks. A few months later it returned to variety theatre use, but cinema use began again in May 1931 when it was taken over by the County Cinemas chain. In 1934 they built their magnificent 1,795-seat Regal Cinema adjacent to the Hippodrome Cinema, which opened in December 1934. The Hippodrome went back to variety theatre use and continued until it was closed in August 1940.

After the Regal Cinema was destroyed by German bombs in September 1941, the Hippodrome was re-opened as a cinema in 1946 and it was equipped with CinemaScope in 1955. It was closed in 1958. It was demolished in 1966, together with the remains of the Regal Cinema and Margate Library was built on the site.