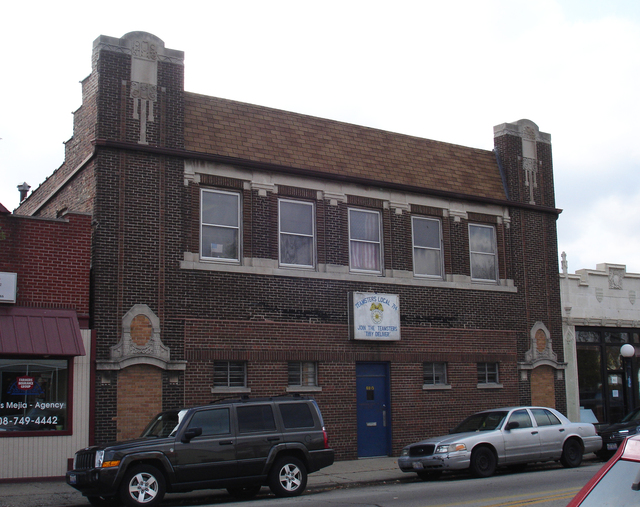 Opened as the Oak Theater in 1934, and located on Roosevelt Road, the theater was renamed the Oakwyn Theater three years later (a combination of Oak Park and Berwyn, the two suburbs it served). The theater closed in 1951, and became a teamsters union hall.

It re-opened in October 2013 as a live music venue named Wire. That closed in March 2020 due to the Covid-19 pandemic.

CHUCK1231, I don’t know how the name Oakwyn had anything to do with the Ritz. The Oakwyn was located near Oak Park Avenue and the Ritz was near Ridgeland Avenue. About four blocks are between them.
I have a “Program” from about 1938. Interseting that the address is listed as 6817 Roosevelt Rd. Roosevet Rd. is also called 12th Street.
Phone # is BER.5691
Adults (to 6:30) 15c: after 20c
Children 10c Always
SATURDAY, OCT. 8 ONE DAY
DOUBLE FEATURE PROGRAM
An Artist in search of an Insprition and Romance!
A Desperate ADVENTURE
Ramon NOVARRO
Marian MARSH
Margaret Tallichet
A Republic Picture

I read that the Oakwyn in the early 1950’s, was the first of the 4 Berwyn movie theatres to close, because of television.
The building does survive as the union hall for Teamsters Local 714.

“Gee Dad, it was a WurliTzer!”

A photo of the theatre is at Cinema Tour. They say it’s a VFW, but I checked the address and it is a union hall.

From a 1949 OakLeaves, the newspaper for the Village of Oak Park Illinois:
“—— in 1949, a controversial film about pregnancy and childbirth called "Mom and Dad” produced by Hygenic Productions was enjoying a long run at the OAKLYN THEATRE, 6817 Roosevelt Road in Berwyn much to the chagrin of Oak Park Trustees who agreed the film should be banned. But since it was being shown “on the southern outskirts” of Oak Park there was nothing they could do to stop it.
Audiences were strictly segregated by sex with women only allowed to view the film at the 7 p.m. showing and men admitted only at the 9 p.m. Trained nurses were on hand at all performances to answer questions.“
To the north of Roosevelt Road is the Village of Oak Park and to the south of Roosevelt Road is the City of Berwyn. Of course the OAKWYN THEATRE was in Berwyn so Oak Park coundn’t do anything about the movie!
It’s sorta interesting to look up "Mom and Dad” on IMDb.

The closing date of the 70’s given in the header is wrong. Bruce C’s picture has it right, 1951. I know, because I lived around there at the time.

The Oakwyn is now coming full circle and is being turned into a music theater venue called “Wire.” Article: http://www.chicagotribune.com/news/local/ct-met-berwyn-music-venue-20130929,0,4784209.story

Wire opened here about a month ago, a music venue a little different from Fitzgerald’s a block or so east, but direct competion nevertheless. Driving by at night you’ll see a huge videoscreen illuminated through the large windows @ Wire that definitely suggests the movie theatre screen that once existed there. No doubt there were elements about this property the new owners were aware of when they decided on the former Oakwyn to start Wire. That little stretch of Roosevelt is gaining some steam, or at least trying to, what with Autre Monde and Bodhi Thai new restaurants there.

Wire closed in March 2020 due to the pandemic and never reopened. The building was recently for sale.