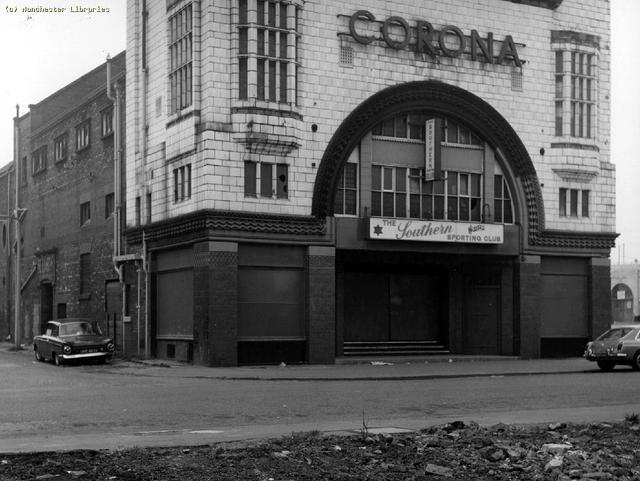 Located in the West Gorton district to the east of the city centre. Opened in April 1915 as the Corona Picture Theatre and operated by the New Century Cinema Circuit. The proscenium was 27ft wide. It had a cafe/lounge for the convenience of its patrons. In March 1928 it was taken over by Denman/Gaumont British Theatres. It was equipped with a British Acoustic(BA) sound system. It was closed by Gaumont British Theatres on 30th April 1950.

From 30th May 1950 it was re-opened as the Corona Cinema by the Snape circuit who finally closed in on 4th October 1958 with David Niven in “Bonjour Tristesse” and Johnny Desmond in “Escape from San Quentin”.

It became a dance hall named the Southern Sporting Club until the 1970’s when it was renamed the Mayflower Club, it moved nearer dereliction becoming StoneGround focusing on rock music. The building bacame derelict in 1980 and it came to an untimely end in 1984 when it was ravaged by fire. The remains were demolished in April & May 1985.