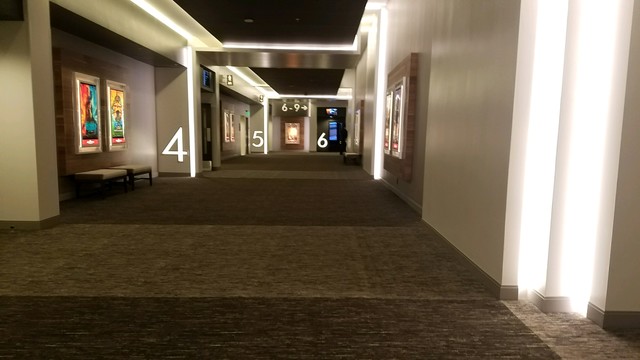 Located where Saks Fifth Avenue used to be in the Shops at Riverside Mall in Hackensack, NJ, this 9 screen luxury theater is the first in the USA to be an ultra lux theater. Besides recliners, there is dine-in delivery service as well as $5 ticket Tuesdays. The theater opened on September 13, 2017.

Went here on Saturday, September 16th to see “Mother!”. The movie wasn’t good (a future camp classic) and our experience at the theater wasn’t much better. I will concede that I think we (and everyone else that came last weekend, its first weekend after opening) were kind of guinea pigs for this theater. When I booked seats for the movie, half the auditorium was marked as unavailable (mostly the first ten or so rows) yet when the movie started, absolutely no one was sitting there. I think the management wanted to limit the number of patrons in order to determine how things would go. In addition, with the exception of “Mother!” and “It”, all the other theaters were showing movies that came out weeks ago like “Baby Driver” and “Dunkirk”. Problems started with the concession line. It was long. One line was for Stubs members which at first was considerably shorter. Then non members were getting on that line and signing up for membership when they got up to place their orders. This caused even longer delays to a point where the non Stubs members line was shorter and moving faster. We got the attention of managers who tried to remedy it but there were so many non members on the line intending to sign up that it was causing a lot of anger. Luckily we were close to ordering our food at that point. It took forever to get our food. Some people didn’t get their food until well after the movie began (we got ours just before it started). The food I had (some kind of chicken fingers) was way too salty. Maybe other options are better. Another issue (though I didn’t try it) was the bar. At first the line wasn’t too bad but by the time we went in, the line was really long. I heard some guy comment that there was only one bartender.

It’s a great looking theater though. More elegant and understated that the AMC at the Garden State Plaza. The movie theater itself was really nice with big reclining seats. Picture and sound were perfect. The lobby is nice but it’s smallish. If they ever have a big crowd, there’s going to be problems.

I understand that this theater will feature more independent films with some big attractions which might help the chronic overcrowding at the AMC Garden State Plaza which is just a few miles west of this theater. The food concept is appealing but if they don’t streamline the ordering and delivery (i.e. you can’t pre-order online like some AMC theaters do), it will fail. Management could have helped the situation had someone acknowledged the fact that they were clearly still testing operations. I wouldn’t hesitate to go back but I would avoid the food (except for maybe popcorn and candy) until they improve things.

I agree with everything you said and recommend you try the AMC West Orange Dine In. It’s COMPLETELY different. I’m shocked they’re trying this out. I went there to see Kingsman 2 and it was so different compared to the west orange dine in.

For one, ordering the food in concession stands lines is a bad idea for dine in. It took 20-30 min for a wait and then a whole hour into the movie for us to get out food in take out containers. At least West orange has waiters at your seats and real plates and forks and napkins. We got plastic-ware and 1 tissue as a napkin.

The seats are smaller than the recliners in West Orange (you can see alone by reserved seating charts). It seems like they wanted to squeeze as much seats in as possible. AND children are allowed in every theater while West Orange only lets them in the 18+ ones, not the reclining 21+ ones.

I had to carry everything to my seat myself except my main order while all this is taken care of in west orange. They bring everything you there. This may sound like nitpicking, but it’s a huge difference between here and west orange and is a big reason I’d choose West Orange over this place. Plus, I’d imagine traffic will be pretty bad during rush hour times here.

West Orange and Bridgewater are much closer than hackensack.

It’s a very upscale and beautiful theater! The food is great, but REALLY expensive. Unlike the AMC Dine In Movie at West Orange, you order at the counter and they deliver the food to your seat unlike pushing a button and a waiter comes at you. Interesting, I’d say. Overall, love it!

With the closing of the tenafly theater, moviegoers will take the train to hackensack and eat and watch a movie.