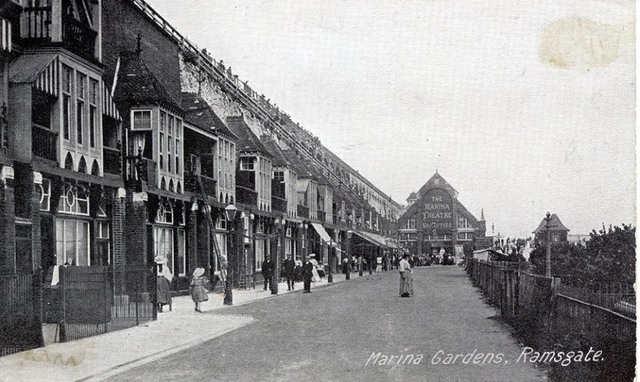 Planned by Edmund Francis Davis and designed by J.T. Wimperis, the Granville Marina formed an extension of the Granville Hotel above on Victoria Parade.

The parade of small shops, tea rooms and houses built in the Old English style within and reached by Marina Road that ran upon the newly built viaduct from Victoria Parade. Only a few examples of the original structures remain today, now Grade II listed.

The Marina Theatre was first known as ‘The Establishment’ and began life as a shared bar and dance/music hall & circus space. Later the hall hosted small variety performances.

From The Graphic, 24th August, 1877: “The hall is 50 feet wide and more than 100 feet in length. It is tastefully decorated in colour and gold, and lighted by an ornamental skylight and side windows of tinted glass, and the recesses around the walls are arranged as an aquarium and winter gardens”.

Over the years the building was heavily modified to accommodate changing social tastes. On 18th May 1908 it began screening films as the Electric Picture Palace and soon after the Excelsior Picturedrome operated by W.J. Attack. Eventually the building would become part of the adjacent Marina swimming pool complex when much additional concrete structure was added to the entrance in place of the original 1877 parade structures.

The building lastly became a series of popular nightclubs towards the early-1960’s, becoming the Supreme Ballroom and then through the 1970’s was known as Nero’s Discotheque and into the early-1990’s (then known as First Impressions).

With the demise of the Marina swimming pool, demolition of the 1905 Marina lift, closure of toilets and general loss of trade for the area, the old hall suffered from fire damage and was eventually controversially demolished by the local council in the late-1990’s. The site was surfaced to form a car park space and the surrounding viaduct structure supporting Marine Road was left and remains in poor condition.

The old entrance and extended forecourt of the hall was eventually redeveloped with modern residential flats in 2011.

I forgot to add that the hall was also known as the Supreme Ballroom in the 1960’s hosting many famous names!

Also known as the Electric Picture Palace, sharing the space of the Marina Theatre. Uncertain whether it was before or after it was named Excelsior Picturedrome.

To add to the original Marina Theatre facts: the building was officially opened as the Granville Marina Music Hall by Earl Sydney on 5th July 1877. The hall had a superficial area of 4,557 square feet and was capable of seating over 1,000 people. More information on the whole Marina development can be read here: http://www.michaelsbookshop.com/catalogue/id138.htm