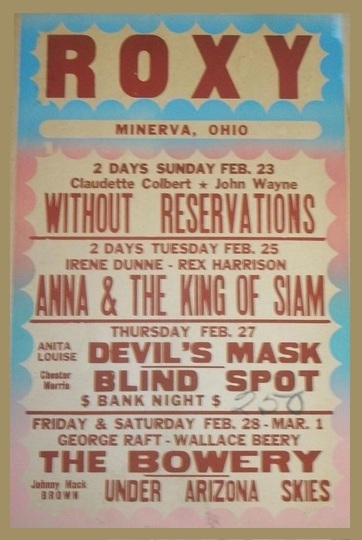 The Roxy Theater was opened prior to 1931. It was still open in 1957 and for a while was renamed Mowhawk Theatre before reverting back to its Roxy name. It became a church in 1985. In 2011 it was purchased by the Chamber of Commerce and was reopened as a community arts center.

This article from June, 2011, gives the address of the Roxy Theatre as 120 N. Market Street. It had just been bought by the local Chamber of Commerce after having been owned by Berean Bible Church since 1985. The article also notes that the house had for a time been called the Mohawk Theatre, though it has now returned to the name Roxy.

This web page has a paragraph about the Roxy:

“The longtime fixture has taken on many reincarnations through the years. From its heyday as the Roxy Theater, where crowds of people lined up along the sidewalk under its marquee, to being renamed the Mohawk Theater in the 1960s, to becoming a church in the ’80s. In 2011, the Minerva Area Chamber of Commerce acquired the building and has refurbished its roughly 180-seat theater as well as restored the Roxy name to the marquee, which now boasts an electronic display that advertises community activities. Now used for music performances, theater groups and other community and business events, it also is rented for private functions.”Because some people claim to have seen a Sasquatch in the area, Minerva hosts a “Monster Day” event which is depicted in this weblog post. It includes a few photos of Market Street in which the Roxy can be seen, and one photo of the theater’s interior. There is a screen in the auditorium, but it looks portable, and when movies are shown they are probably from DVDs. As the church that occupied the building for over a quarter of a century did considerable remodeling it’s likely that the original movie equipment was removed long ago, and modern digital equipment is probably beyond the budget of a small house that is used mostly for live events.

Trade journals from the 1920s mention a movie house in Minerva called the Dreamland Theatre. I haven’t been able to determine if this was an earlier name for the Roxy, but the Roxy’s building looks old enough to have been in use then.

It has little information about the theater itself, but this article from Boxoffice of November 17, 1951, focused on the Roxy’s manager, Wilton Gross, is an interesting look into the small town theater business of the period.