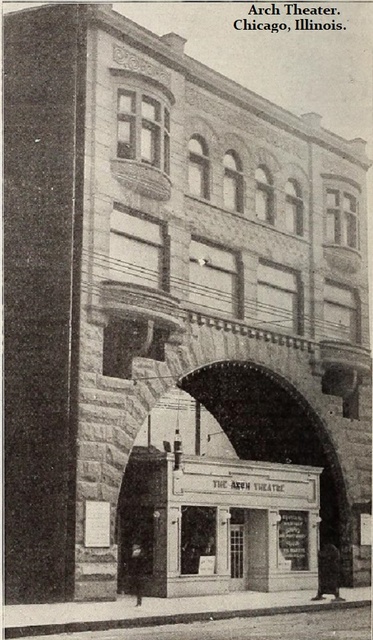 This theater was originally opened around 1909 as the Arch Theater, located in the Englewood neighborhood on W. 63rd Street at Yale Avenue. By 1911, it had been renamed the Yale Theater.

The Moving Picture News of November 25, 1911 has an article with a photo attached which describes the theater.

“Among the South Side moving picture theaters worth of a special notice, attention is directed to the Yale Theater, at 336 West Sixty-Third street, about two blocks west of Wentworth avenue. It is owned and managed by Mr. P. Lunn, and has a seating capacity of eight hundred persons.

As will be seen by the accompanying photograph of the front, the theater seems to have been built into the lower part of an ordinary apartment building; the front is made attractive by varied colored lights on the arch over the entrance. The lobby of the theater is large and is decorated by attractive posters of coming features.

In the interior decorative scheme, green and red predominate. Twelve shaded sidelights give ample illumination. Four electric fans regulate the ventilation, providing the abundance of pure air at all times. The operating room is at the rear of the theater and is situated a little to one side of the center, causing the pictures to be thrown at an angle, which made a great deal of difficulty at first in producing a good picture.

The Yale Theater was formerly a straight vaudeville house, but at present a straight picture program is given, consisting of three reels of first-run pictures. Price of admission is five cents. A piano player and man on the stage add to the reality by playing the pictures."

The Yale Theater disappears from the Chicago Tribune film listings by the end of 1914. Today, the site of the theater is the Ambulatory Care Center of St. Bernard’s Hospital, opened in June 2016.