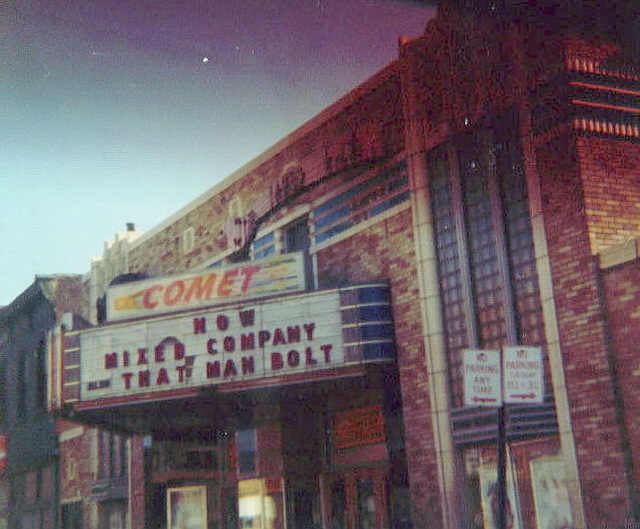 They put neon along the roof line of the theatre above the marquee with a comet shooting across the top. It was an African-American theatre.

The theatre survived until 1972. It stood closed for many years, but had a huge hole in the side of the building. You could look in and still see the seats and the torn screen. It was later demolished.

This is from Boxoffice magazine in January 1960:

ST. LOUIS-The Strand at 2000 Market Street, a 470-seater, has been closed by Tommy James, who also owns the New Comet and Douglas theaters.

Apologies all! I had confused the Criterion with the Comet. It was the Comet that had a gaping hole in the side wall that was easily seen from the street, not the Criterion. My memory of the Comet was that it had a vertical sign that had flashing lights with a (Comet) lights flashing upward. I don’t think it was neon, but I may be wrong. The 1985 picture is really sad. I can seem to think that this was the same theatre and reminded me a little of the Regal. Patrick.

One of the movies on the marquee in the photo above, MIXED COMPANY, was released in October 1974, so the Comet was open past 1972.

The New Comet was on 21st and Market according to an advert in the St Louis Argus in 1916.

Hi again. I wonder if there’s any way we can get the current main picture removed—it is most certainly not the correct Comet theater.

I think we should clarify our details here.

The Comet at 4110 Finney opened in 1940, not 1939. I’m fuzzy on when it closed however I would challenge the date of 1972 as I have a newspaper clipping from the Post-Dispatch in 1975 discussing a neighborhood children’s party thrown by theater ownership (see photos).

According to a document I have, the Motion Pictures Theater Owners annual bulletin, as a grand opening gesture James had 10,000 balloons filled with helium and inserted in every 5th balloon a free pass for the theater. The pamphlet says for days afterwards children were seen combing the neighborhood, climbing trees and roofs in order to get a hold of downed balloons in hopes of finding a pass. (see clipped excerpt)

In addition to hosting movie showings, as a previous comment pointed out, James also hosted musical acts at the comet including Louis Armstrong, Miles Davis, Cab Calloway and local acts like Chick Finney. James, a community patron as much as a business owner also rented his venue to community organizations such as the local YMCA branch, the NAACP and the Urban League.

Skipping ahead, after the closure (whenever that was) the theater did sit vacant for some time. In the early 1980s as Grand Center was seeing a comeback with the Fox and Symphony Hall projects, Municorp looked at the prospect of producing a similar redevelopment on Finney with the Comet (see clipping). Due to changes in the UDAG program the proposal did not get the funding it sought and collapsed—ultimately leading to the demolition of the structure which many community members (see clipping) had found to be a public nuisance.

Larry Giles, owner of the National Building Arts Center (across the river) salvaged the facade of the theater prior to demolition. He did not take the Marquee and according to his notes the signature comet neon signs were in such poor condition they were not salvageable. Some of my sources for this text were taken from documents, many water damaged but rescued by Giles, from inside the theater’s office.

localarchivstSTL: The photograph you mention in your comment above has been removed and placed on its correct page for the West End Theatre. Thanks for pointing this out.

Theatre opened August 8, 1940. Theatre did not “become” an African-American theatre; it always was.