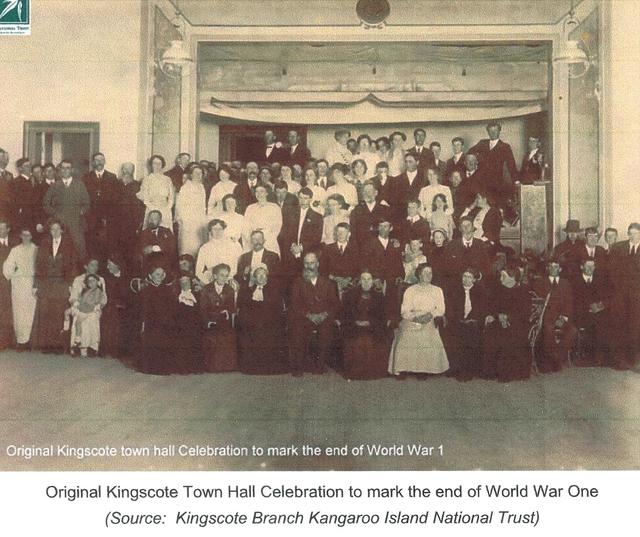 Located on the corner of Dauncey Street and Murray Street. Opening and closing dates of Kingscote Public unknown? Number of seats unknown? Now used a a council meeting hall.

HISTORY AND DESCRIPTION: The District Council was first proclaimed on 5th January 1888 and the meeting took place in the Queenscliffe Hotel. The original Council Chambers were constructed in 1898 with meetings up until this time held at the Hotel. On 26 October

1903, the name of the town of Queenscliffe was changed to Kingscote. In 1912 a larger hall was erected behind the original building. The two storey building facing Dauncey Street and incorporating two shopfronts, which was constructed in 1955, is the work of Adelaide architect and contractors Walter D Cowell of William M Essery and Sons Pty Ltd.The additions incorporated the earlier hall on the site. Internally, the complex retains much of its original detailing.

There are important items of local art in the building, including the mural displayed in the foyer which was designed and embroidered by Kangaroo Island CWA members. In the main hall is a second mural designed by Ben Gerdsen and crafted by the Kangaroo Island Spinners and Weavers. Prints on the stair well depict The Investigator and Le Geographe. The building continues to provide a focal civic and cultural function within Kingscote – Contributed by Greg Lynch –