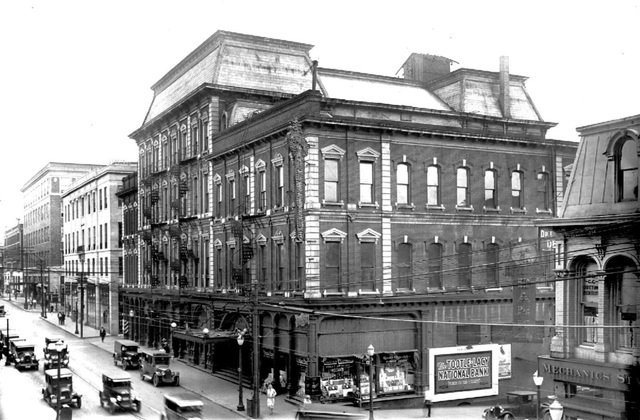 Milton Tootle built a nearly $200,000, almost 1,500 seat opera house launching December 9, 1872. With its three balconies and massive opulent boxes, architect W. Angelo Powell’s French Renaissance style grandeur wowed audiences back in the day. The Atmospheric sky effect on the ceiling and dome took people back to the days of Louis XIV. Sarah Bernhardt, Buffalo Bill Cody, Edwin Booth and Oscar Wilde were among the performers who were on the giant stage measuring 100' wide, 67' high and 50' deep.

The Dubinsky Brothers took on the theatre as its fifth operator and would switch for Dubinksy live stock to motion pictures in 1919. The theatre stayed silent and finally in 1933, the building was completely gutted down to its four walls and became the Pioneer Building with offices and some retail.

On November 21, 2016, the 144 year old theatre was gutted in an epic fire. The city called for its demolition within a month.

A spectacular photo of the Pioneer Building in flames can be seen on this web page from the National Trust for Historic Preservation.