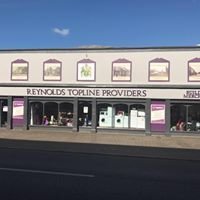 Located in Mohill, County Leitrim. The Ritz Cinema opened around 1942 and was owned by Nicholas Keegan. It had a 12ft wide proscenium and originally had a Phillips sound system, later an RCA. It fell victim to fire in 1952 and had to be repaired, during which films were screened in the Canon Donohue Hall. The new Ritz Cinema had 400 seats, more than half the population of the town. It is believed to have closed around 1969. The premises are now occupied by Reynolds hardware store.