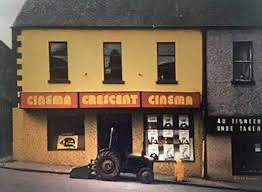 Located in Boyle, County Roscommon. The cinema is still fondly remembered as the Abbey Cinema and had started life as the plain old Picture House by the 1920’s. It was run by John Lowe who had it enlarged in 1939 extending the floor area and balcony, and raising the roof. New projection equipment was also installed and the seating was now 600 as opposed to the previous 320. It re-opened as the Abbey Cinema with the film “The Adventures of Robin Hood” starring Errol Flynn. Donal Farrell was running the house by the end of the 1960’s but he sold it to Padraig Kelly who had the cinema refurbished in 1976 to include a new screen and new seats. It then became the Crescent Cinema and the first film to be shown was “Bugsy Malone”. The cinema was still operating in 1991 but the building fell victim to fire. It is now occupied by retail outlets.