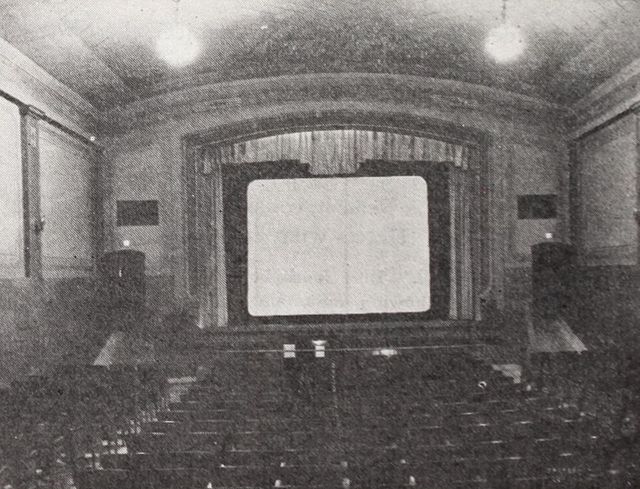 Located on Pine Avenue between Topaz Street and Saphire Street. The Victory Theatre was opened in 1926 and was still operating in 1956. It had closed by 1957. It was demolished in 2004 and a parking lot for Bank of the West is now on the site.

Today a newly built Victory Theater operates at a different address and has its own page on Cinema Treasures.

The Victory Theatre had been opened by March 13, 1926, when that date’s issue of The Moving Picture World provided this information about it:

“The new theatre is called the Victory and is owned and operated by Frank Davis and Wilford Williams. It represents an investment of $60,000, which includes land and fixtures, etc. It is of fireproof construction, brick and concrete, and is 37 ½ ft. wide by 140 ft. long and has two small store rooms in the front. Has a seating capacity of 524, upholstered seats.

“Has a stage for road shows. Booth equipment consists of two latest Powers 6B improved Projectors with Powerlite Reflector Lamps and Roth Brothers Actodector Generator. The theatre is equipped with good heating and ventilating system which assure good ventilation and proper heating at all times. The acoustics of the theatre are very good. It has all the modern conveniences.

“The Architect is D. D. Spani, Rock Springs, Wyo. The booth equipment, and the chairs which are Heywood-Wakefield, were sold and installed by Utah Theatre Supply Co., Earl D. Smith, Mgr., Salt Lake City.”Davis and Williams had been operating the New Kemmerer Theatre, built in 1910, since 1922. The Victory’s architect, Daniel D. Spani, had been practicing in Rock Springs since moving there from St. Louis in 1911.

The fourth photo on this web page is a view of Pine Avenue, probably from the late 1920s, with the Victory Theatre’s vertical sign prominently featured.