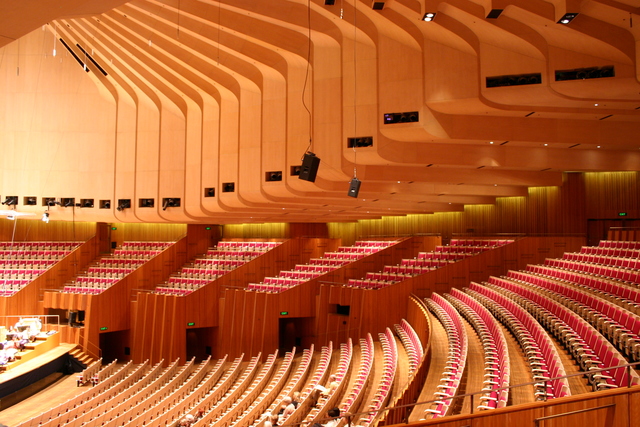 Located on Bennelong Point in Sydney Harbour. Originally Fort Macquarie was built on the site. This was later demolished and was replaced by a tram depot which opened 10th August 1902 and was demolished in 1959. On 30th November 1954 proposals were made to build an opera house on the site. A competition featuring world class architects was held to design the theatre and winner was the Danish architect Jorn Utzon(1918-2008). Construction started on 1st March 1959 and in February 1966 Jorn Utzon retired from the project.

A new team of architects were appointed to complete the project:Peter B. Hall, Lionel Todd, David Littlemore & Edward H. Farmer. It was was opened by Her Majesty Queen Elizabeth II on 20th October 1973. The Sydney Opera House has 6 indoor performance areas(Concert Hall - 2,679 seats, Joan Sutherland Theatre - 1,507 seats, Drama Theatre - 544 seats, Playhouse - 398 seats, The Studio - 400 seats, Utzon Room - 210 seats) and an outdoor foyer used for performances too. When it first opened what is now known as The Studio was originally The Music Room which had 420 seats. It was used for recitals and chamber music, but also had use as a Cinema. It was equipped to screen 70mm, 35mm & 16mm films.

There was a screening of “Harry Potter and the Chamber of Secrets” with a live orchestra in the Concert Hall on 4th October 2017 to 7th October 2017. “Harry Potter and the Goblet of Fire” with a live orchestra was screened in the Concert Hall on 15th August 2018 to 18th August 2018. The Sydney Opera House also has concerts, opera, classical music, ballet, dance performances, plays, musicicals, and live stand up comedy. There are also bars, a restaurant, cafes, retail outlets, and a recording studio.

The Sydney Opera House was put on the Register of the National Estate in 1980, and the National Trust of Australia Register in 1983, the City of Sydney Heritage Inventory in 2000, the New South Wales Heritage Register in 2003 and Australian National Heritage List in 2005. It became a UNESCO World Heritage Site on 28th June 2007.

The Sydney Opera House was seen on an episode of “Billy Connolly’s World Tour of Australia”(inside and outside).

One My fav building in Sydney