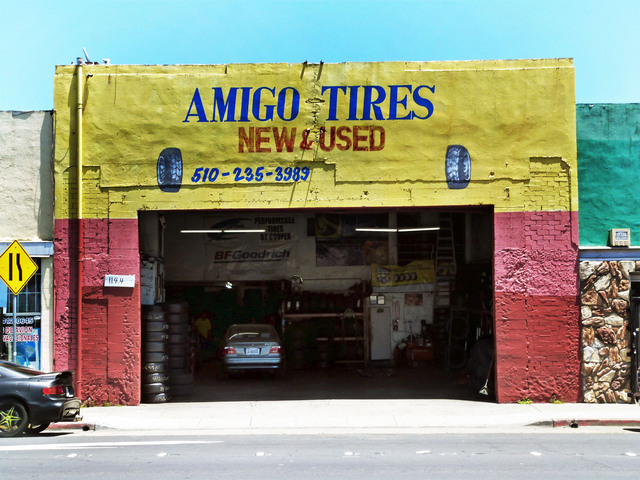 A long-departed neighborhood theater. The Grand Theater was opened on February 14, 1942.

I hunted this theatre down about ten years ago using its address in the Film Daily Yearbook for 1951. At the time I found it, its concrete shell was still standing, and housed an auto repair shop. The facade had been opened up with a rollup door for moving cars in and out.

The Grand Theatre was part of Fox West Coast Theatres in their East Bay District. The theatre seated 670 people.

In the 1950’s the Grand wasn’t all that “grand”…it had seen better days, but like all theatres in those days, it had it’s own “character”. It was then a second run Fox West Coast theatre near Richmond High School, sometimes playing move over programs from the downtown Fox (formerly Costa). What I remember most about the Grand were the kids matinees in the summer with an admission price of 9 cents. I first saw “The Wizard of Oz” and “The Yearling” there, along with many other current films and reissues. It closed down about 1956 or 1957, it’s final days being a weekends only operation. They never even installed a wide screen but did get CinemaScope lenses and played a few Scope films letterboxed on their old academy ratio screen.

The La Tech Auto Body shop is still listed at this address. If any locals have seen this building since 2004, let us know if this is the original theater building.

Yes, this is the original Grand Theater and the building is still standing to this day. It is the Auto body shop on the Rheem Avenue side and a Tire sales shop on the 23rd Street side in Richmond, California. I was just by there today and took pictures for my facebook photo album titled “Bay Area Today” which can be seen here-
Rheem Avenue photo:
View link

The Grand Theatre opened at 23rd Street and Rheem Avenue on February 14, 1942, the first in the Robert L. Lippert theatre circuit and the first of four theaters Lippert would open in the Richmond area within the following year and a half. The Grand was the first of several new theaters opened during World War II to serve Richmond’s rapidly increasing population, much of it newly employed in the Kaiser Shipyards. The Grand cost $80,000 to build and was built and opened in an amazing 97 days.

Fox West Coast Theatres purchased the Grand from Lippert in 1944 and after a complete remodeling re-opened the Grand on August 13, 1944. It would remain a Fox West Coast house for the remaining of it’s movie showing days.

We’ve been using the wrong address for the Grand Theatre. The auto body shop entrance at 2311 Rheem Avenue was cut into what had been the end wall of the auditorium. Comparing the vintage photo with modern street view, the theater entrance was where Amigo Tires is now, at 1144 23rd Street. The Grand Market was on the corner, inside the “L” of the theater.