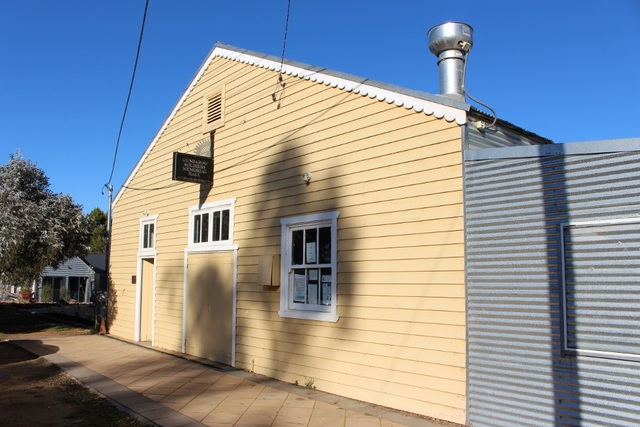 Built as a skating rink in 1870 (a simple corrugated iron building with diagonal white cypress floor), the building was expanded in the 1920’s with stage and change room and Euchre room. It was the venue for travelling picture shows that projected from a truck that backed up into the foyer.

During the 1970’s the building was again extended with side supper room and the foyer was enclosed and the building lined completely. Portable 16mm projectors were then used to start a monthly film club. This was revised in the 1990’s with a professional 16MM 2000W EIKI Projector System.

The hall was extensively renovated over the last twenty years with new flooring, new kitchen and curtains and double glazed windows, and the installion of a digital projector system, a powered drop-down 18 foot screen a 1200W surround sound system and an independent PA for public use. As a multi-purpose community hall there are not fixed seats, but new padded seats are placed each screening. Films are often combined with catered meals and fund raising efforts The Hall is run by a volunteer committee, and is owned operated and managed and largely funded by the community.