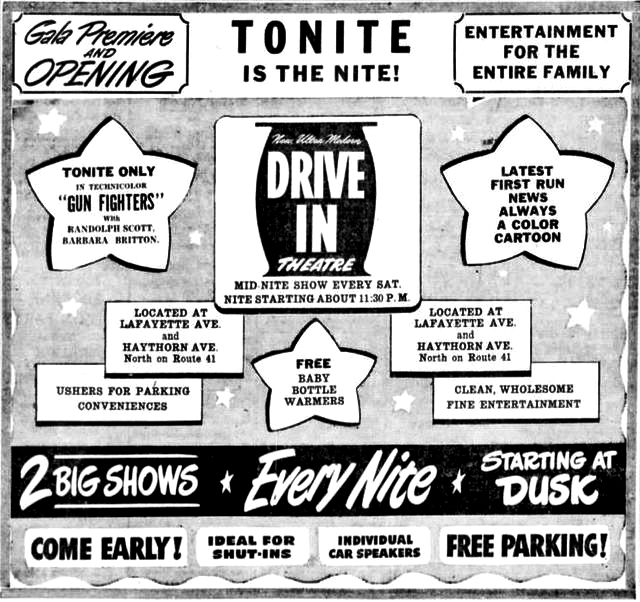 Terre Haute’s first airer to open was just named the “Drive-In” which was common practice back in the early days of drive-in theatres. The Drive-In opened on May 22, 1948, screening the 1947 western “Gun Fighters” with Randolph Scott, Barbara Britton and Dorothy Hart. The new drive-in theatre was opened by Ohio interests Harold Boedeker, Leslie Judd, Stewart Sheldon and Elizabeth Ochs (dba) Terre Haute Drive-In Theatre Company. Ochs a well-known theatre operator in Dayton, Ohio, and Indiana was also included in the listing. The drive-in was built on leased land from Robert Connelly, (dba Terre Haute Gravel Company) for 7-½ years with an option for 7 more years. It had a car capacity of 640 cars with in-a-car speakers. The estimated cost of the drive-in was $150,000.

When the theatre reopened for 1968 season it did with a new operator, the Fourth Avenue Amusement Company from Louisville, Kentucky. Unfortunately the lease for the property was about up and it did not get renewed. The theatre closed for good on November 17, 1968 at that location. The Fourth Avenue Amusement Company moved the North Drive-In theatre to a new location nearby at 5056 Lafayette Avenue to be reopened for the 1969 movie season. Since the original property was still owned by Terre Haute Gravel Company at this time, it has been used as a borrow pit.

In 2018 the KJB Theatre company took over the site located at 5056 Lafayette Avenue and following renovations it opened the 555 car capacity Moonlite-Drive-In on September 22, 2018.

Final night of operation at this location, according to newspaper listings, was November 17, 1968 with “The Odd Couple” and “Sebastian”.

Does anyone know what the price of tickets were in 1967-68? Is this one of the drive ins that had electric in-car heaters during the winter? Thanks.

A more accurate address for this theater is 2751 Lafayette Ave, Terre Haute, IN 47805. This points directly to where the entrance road stood. That’s a man made lake at this location today BUT in a 1962 aerial, there definitely was land and a drive in theater located here.