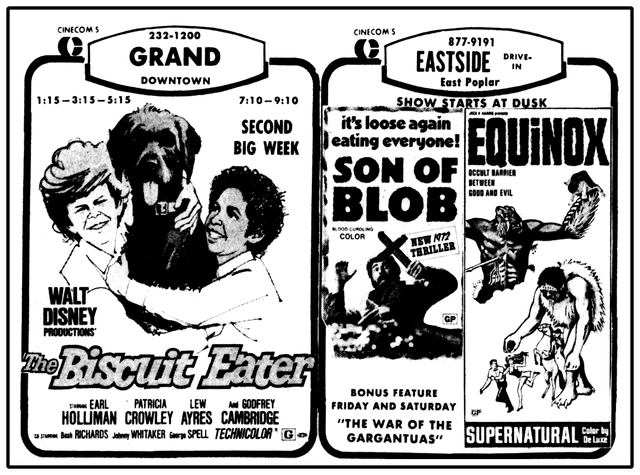 The Eastside Auto Theatre opened on August 19, 1949, screening the 1948 comedy/drama “Scudda-Hoo! Scudda-Hay!” with June Haver, Lon McCallister and Walter Brennan. It had car capacity 600 cars with RCA in-a-car speakers. The Y & W Management Corporation from Indianapolis, Indiana, was operating it in beginning, but I don’t think they opened it. They were operating the Terre Haute Drive-In Theatre also at this time in 1951. In May of 1952, the Eastside Auto Theatre was renamed as the Eastside Drive-In Theatre. In 1953, the Alliance Theatre Corporation from Chicago, Illinois, was the new owner of the Eastside Drive-In.

In May of 1960, the Eastside Drive-In got a new screen tower and two new ramps to accommodate 175 more cars along with new projection equipment. Alliance Amusement Corporation sold the Eastside Drive-In, in June of 1969, to Cinecome Theatres Midwest States, Inc. from New York, NY. Unfortunately in July of 1973, Cinecom Theatres went bankrupt. A New York Federal Court ruling ordered the theatres to be closed. It affected four Terre Haute theatres, the Meadows Cinema, Plaza North Cinema, the Grand Theatre and the Eastside Drive-In Theatre.

The Eastside Drive-In was reopened in 1975 and finally closed end of season 1979 for good. The drive-in was demolished and the property sold. It is now the location of doctor’s office’s and residential housing.