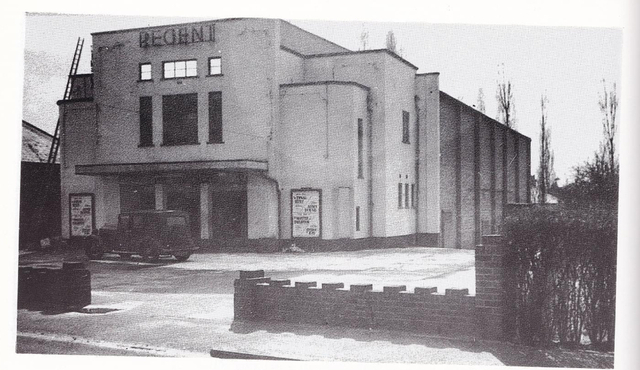 Located in the village of Stotfold, Bedfordshire. The Regent Cinema was opened 15th April 1938 by Frank W. Smith. All seating was on a single floor. It was equipped with a Christie 2Manual/8Ranks organ, originally installed in La Scala Cinema, Glasgow. It was opened by organist Pierson Webber. The cinema was taken over by Central Cinema(South Norwood) Ltd. in 1948. The Regent Cinema was closed in May 1952. The Christie organ was removed and installed in the badly war damaged Ritz Cinema, Birkenhead.

The Regent Cinema was converted into a bingo club, but it was not successful and the building was taken over by the Stotfold Ex-Servicemen’s Club. A dance floor was laid where the seating had once been and a balcony was added which contained a refreshment room and games rooms. In May 1963, a Christie 3Manual organ which had previously been installed in the Carlton Cinema(ABC), Tuebrook, Liverpool, was purchased from a man who owned the instrument. It was installed in the former Regent Cinema and was inaugurated on 13th October 1963. It was used to accompany dance’s in the building. In 1987 the Stotfold Ex-Servicemen’s Club was closed and the organ was transferred to the Gordon Craig Theatre, Stevenage. The former Regent Cinema has since been demolished.