Louis Wolfe opened the Strand Theatre in South Ottawa on May 19, 1949 with Red Skelton in “The Fuller Brush Man” & Roy Rogers in “Eyes of Texas” plus a cartoon “Figaro and Frankie”. It reopened under new management on May 1, 1950 with John Wayne in “The Fighting Kentuckian” & Pennie Singleton in Blondie’s Reward". This was Ottawa’s third Strand Theatre but first in the sound era.

The first Strand Theatre in Ottawa had launched at Wellington Street on October 29th, 1914. The second Strand Theatre was at 126-8 Sparks Street opening September 2, 1918 with Theda Bara in “Cleopatra.” It closed March 5, 1921 when it was sold for $195,000 to the Home Bank of Canada. The operator moved to the larger and newly-appointed Capitol Theatre.

This third Strand Theatre appears to have closed following the October 30, 1954 showings of Dale Robertson in “Lydia Bailey” and Clifton Webb in “Stars and Stripes Forever”.

Under new ownership in 1955, the theatre re-launched as Strand Hall with live music and dancing. It also hosted regularly scheduled antique auctions in the daytime for ten years. It was home to a retail store briefly before returning to live stage shows with rock and roll music and dancing in 1963. But Strand Hall’s main function was as a long-running Bingo Hall that lasted from 1956 to the 1990’s. In 2002, after being vacant for a lengthy period, Tim Hortons bought the property and the facility was demolished in favor of a restaurant/doughnut store. 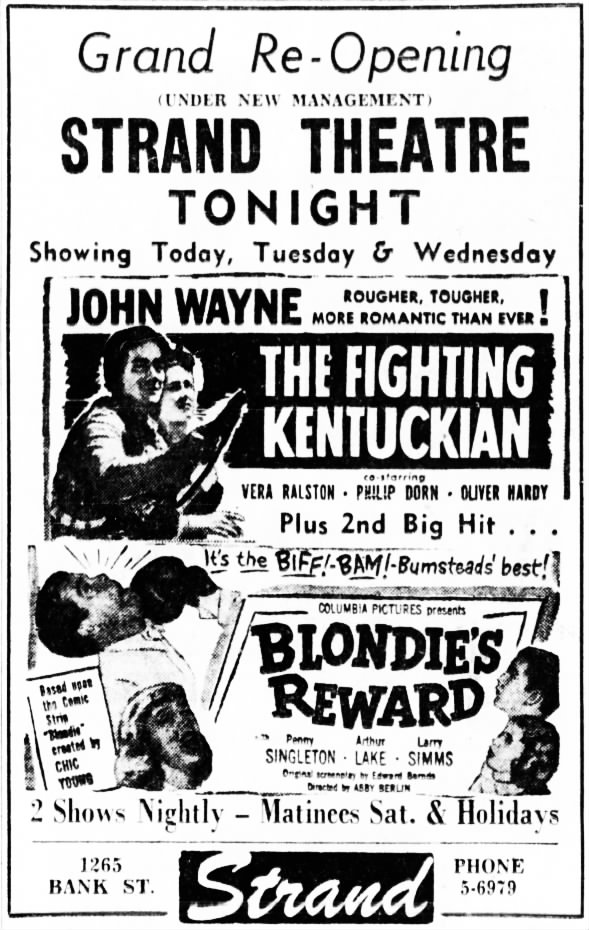