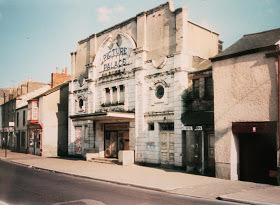 Located in Dalton-in-Furness, five miles to the north of Barrow-in-Furness, Lancashire (now Cumbria). The Empire Picture Palace was opened around 1914. It had an ornate facade decorated in white white terracotta. It presented picture and variety. All 550 seats were on a single level and the proscenium was 29ft wide with a 14ft deep stage. There were two dressing rooms. By 1934 it had been equipped with a British Thomson-Houston(BTH) sound system and it was leased to the James Brennan Cinemas Ltd. circuit.

In 1936 it was closed for renovations and was enlarged by adding a balcony. The seating capacity was now 687 and the proscenium was 32ft wide. It was re-named Roxy Cinema. It was still open in 1966, but soon went over to part-time bingo & films until the 1970’s when it became a full-time bingo club. This closed in 1988 and building became derelict. It was demolished in late-1997 and a supermarket was built on the site.