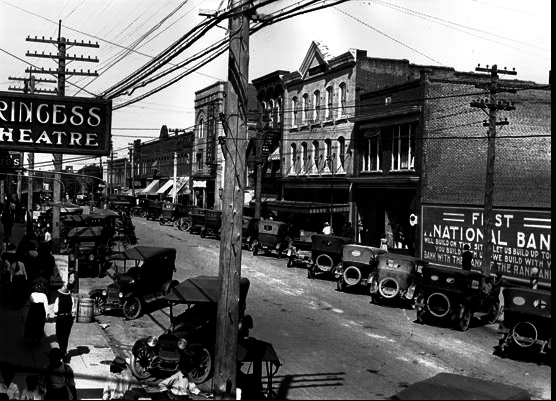 One of several early theatres on S. Garnett Street in Henderson, although the 1914-1915 edition of American Motion Picture Directory lists the Princess Theatre on Main Street. It was located across S. Garnett Street from the First National Bank building and adjacent to the 1928-built Stevenson Theatre. By 1926 it was listed in the Film Daily Yearbook with 320 seats and was operated by the Stevenson Theaters Company. It was still open as a silent movie theatre in 1931 with 250 seats, but was listed as (Closed) by 1932 and in 1933 & 1934.

In 1935 a 250-seat Moon Theatre had opened which was still open in 1938. It had gone from listings by 1939. Whether the Moon Theatre was a renamed Princess Theatre is still to be determined.

The former Princess Theatre building still exists in 2019, but is vacant having last been used as a Roses store.

I have uploaded a picture showing a portion of the signage for the Princess. I created the site indicating the theater was on Garnett because of a postcard image I found showing adjacent buildings to the Princess identified as Garnett Street.

According to Joe Vogel, in a comment on Henderson’s Stevenson Theatre site, the Princess was part of the small Stevenson Theaters Company which also operated houses in Burlington, Greenville, Mesane and Raleigh.

I determined that the Stevenson circuit was incorporated in 1925. It’s interesting that the company was “Theater” but their playhouses were “Theatres”.