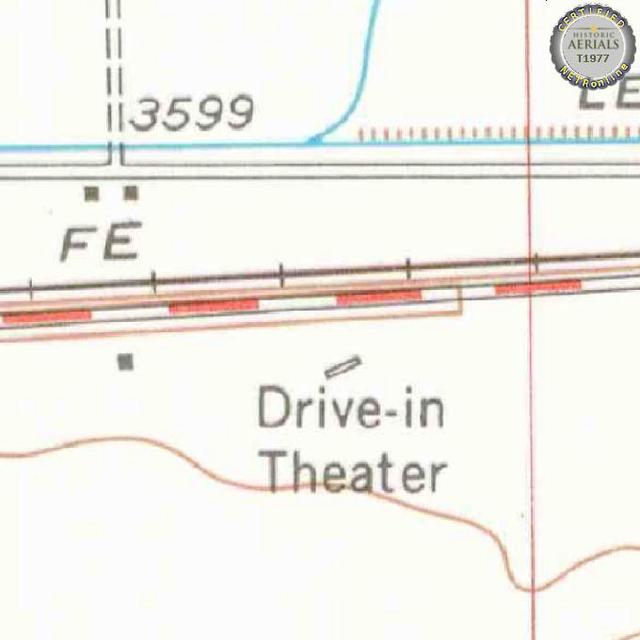 The drive-in appears in a 1954 topo map. During its winter closure in 1962 it was destroyed by fire.

Today, it is private property, but you can still see the general outline and ramps.

There are several references to a drive-in on the east side of Lamar, so that would have to be this site, which was visible on 1954 and 1977 topo maps but gone from the 1979 topo map.

At least some Motion Picture Almanacs (looking at 1962 as I type) carried a listing for the Kar-Vu in Lamar, New Mexico. Except that there is no town named Lamar in NM, so I’d guess it’s southern Colorado instead. Capacity was 400 (much larger than Springfield’s later Kar-Vu), owner Atlas Thea. Corp.

Sure enough, when I cross-reference the Denver-based Atlas Theatre Corp. listing that year, it shows only Colorado theaters, including the Kar-Vu Drive-In (and the Lamar and the Pioneer) in Lamar CO. Atlas continued to include the Lamar’s Kar-Vu in its holdings through at least 1972, though it was gone by 1976.

That came one week after another BoxOffice note on the future Kar-Vu’s geography. “LAMAR, COLO. – C. U. Yeager, president of Atlas Theatre Corp., opened the 400-car, $60,000 drive-in under way here about May 6. It is located east of the city.”

In a USGS photo taken June 8, 1975, the Kar-Vu site is already partially overgrown and the other drive-in north of town is active. I’d guess that the Kar-Vu closed around 1972.

After running grand opening ads set for the 18th all week in the Lamar Daily News, the Kar-Vu shifted the date to May 25, 1950. It met that opening, showing “Red River,” “Return of October,” and always a color cartoon.

Looks like it wasn’t a flood that took out the Kar-Vu. The last ad I could find in the local Tri-State Daily News was Sept. 13, 1962, and on April 15, 1963, Boxoffice reported: “The Kar-Vu Drive-In, Lamar, damaged by fire during the winter, will apparently remain closed.”