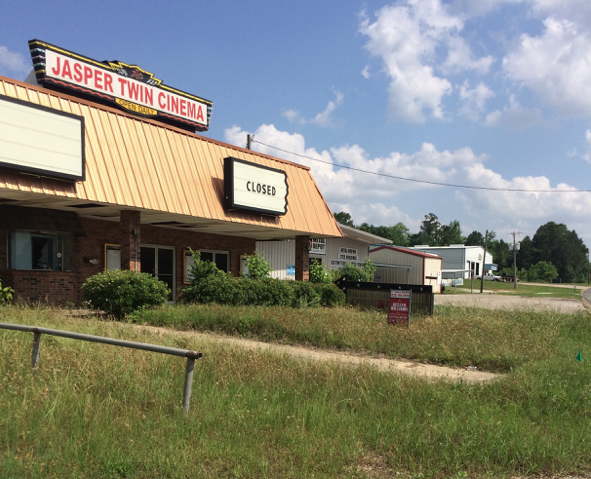 Located at the cortner of S. Fletcher Street and Hursey Street in the east Texas town of Jasper. This 7,458 sq.ft. twin screen cinema opened in the late-1970’s. The Jasper Twin Cinema was closed on February 26, 2013. It was still standing unused in 2015.

Jasper Twin Cinema in Jasper, Texas. Closed February 26, 2013. From newspaper account of closing: The owners of Jasper’s only movie theatre have announced that the business is closed and not expected to re-open. Suzanne White of Livingston said that she and her husband Terry, who also own and operate the Fain Theatre there, decided to close the theatre here in Jasper after loosing money for almost five years since they bought it. However, White said her husband’s medical condition also weighed in the decision. White said that unlike Livingston, the Jasper Community simply did not support the theatre here and that turn out was generally small with less than 20 people in attendance at the final show on Sunday evening.

In addition, White said that it was hard to find people willing to work here in Jasper and that continued vandalism was also another problem the couple faced here. What will happen to the theatre is unknown, White says the property is up for sale and will soon be listed. While many small theatres across the nation are closing, due to the ongoing conversion to digital, White said that the transition from film to digital technology was not a factor in deciding to close the business. She said that even though the theatre was still using 35 millimeter film, that predictions were that they would be able to still utilize the existing projection equipment and utilize film for at least another two years.

White said that with the closure of the theatre here in Jasper that she would be able to totally focus on the operation of the theatre in Livingston where they will soon celebrate 65 years of operation. The Jasper Twin Cinema was the fourth movie theatre to operate in the City of Jasper. The first theatre was the majestic located on West Houston Street, near the intersection of the Main Street. The second theatre was the Lone Star, which was located on Austin Street where a vacant lot now exists across from the Jasper County Courthouse. The third theatre was the Texas, which was located in the 100 block of North Main Street, where the Jasper County Appraisal District is now located. The Jasper Twin Cinema Theatre was built in the late 70’s by Johnny and Hazel McGlown.

JUNE 2016 Real Estate Listing: Jasper Twin Cinema with cinema projectors still in place. The building is 7,458 sq. ft. and the lot is on 0.518 acres. Plenty of parking and space inside to use as cinema or as office building. Needs TLC and at this price it is a wonderful buy for cinema or another business building! From Livingston take US-190 E and travel 60 miles to Jasper. Turn right onto Pollard St. Turn left on S Fletcher St.