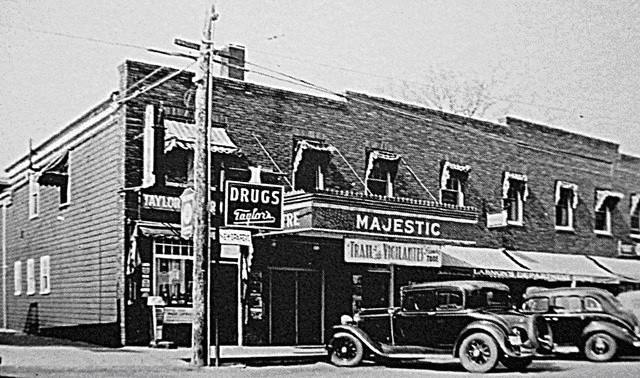 The Majestic Theatre was opened in 1931. It was closed in 2005 when the building was gutted by fire. In 2015 it was taken over by Mountain Top Music Center, and renovation work began. When completed it will be used as a music school and other businesses. There are also plans for it to serve as a multiple art venue, featuring music, theatre, film and social events.

I wanted to see a movie in this theatre so I saw “Maria Full Of Grace” for a second time. Joe Quirk, the owner gave me the complete tour. The twinned theatre in North Conway and the Mt. Valley Mall Theatres (six screens if I remember correctly) make it difficult for Joe to show anything even close to a blockbuster film but he’s survived for many years and is determined to keep the Majestic open. Joe’s upgraded many of the theatre’s mechanics and it’s a great place to see a movie. The opportunity to see the lovely art deco wall sconces alone is worth more than the admission price.

Joe’s no quitter so if there’s anything left after the fire, the theatre will re-open. I only hope those lovely wall sconces weren’t damaged. Looking forward to seeing you and the completed restorations this fall.

Here are photos taken after the fire in April 2005:
http://tinyurl.com/ynxdlq

biked by this the other day. looked like it was back in time. the stagehouse is nothing to die for. Conway is a quiet town, as i came down the Kanc en route to Fryeburg. North Conway is where all the action is. I have pix.

The Majestic Theatre has been purchased by Mountain Top Music Center and will be renovated.

Read about the project at: www.mountaintopmusic.org/majestic

Here is a feature article which details the story and plans, from the Conway Daily Sun (April 2015): http://www.conwaydailysun.com/newsx/local-news/120193-mountain-top-s-majestic-future-community-music-school-purchases-historic-building

I was the main projectionist at the Majestic during my high school years in the late 70s/early 80s. My uncle Jon Hively, who still lives in the area (and recently published a book about his years working on the Cog Railway) was instrumental in re-opening the theater back then. He taught me how to run the Simplex projectors, which of course were lit with rectifier powered carbon arc lamps. It was a great experience for me, and looking back, somewhat of a privilege. I made about $25/per show, which was spent immediately later in the evening, usually at Horsefeathers where I’d meet up with friends. In the winter there could be 5 people in the house. It was nearly impossible to heat the place, and I wondered how the fuel bill could possible be paid out of the meager receipts. The manager, Rob George, and I would shovel the snow off of the stage roof. In the summer I remember an occasional full house, which I think was about 400. The screening of “The In-laws” was one such time.
So many great stories and memories!