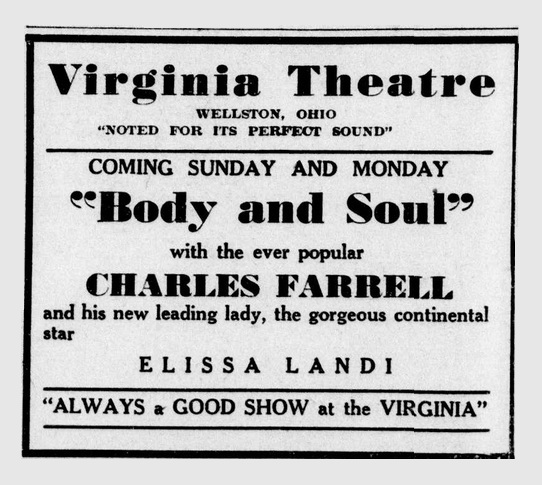 The New Virginia Theatre appears to have opened in 1908 by W.O. Yard. It had an air cooling system that used water from the town’s coal mine. The theatre converted to sound. Manager L.T. Gullfoyle made news by defying a non-Sunday operation blue law and was promptly arrested.

Western star Ken Maynard and his horse, Tarzan, made a personal appearance at the theatre in the 1930’s. The Virginia Theatre was listed as (Closed) in 1940 & 1941. The Chakeres Circuit gave the theatre a streamlined makeover with new neon signage. The theatre suffered a fire in 1946 and, though rebuilt, may not have relaunched movies.

The August 10, 1955 issue of The Portsmouth Times of Portsmouth, Ohio, reported that the stage of the Virginia Theatre at Wellston had partly collapsed during a storm the previous Sunday. Mrs. L. P. Guilfoile, owner of the building, had been ordered by the State Fire Marshall to have the remaining walls of the stage demolished. The item did not say whether the theater had still been in operation at the time of the collapse.

The Virginia Theatre was mentioned in the February 8, 1919 issue of the coal industry journal The Black Diamond, which said that the 1,000-seat house had the largest auditorium in the county.

The June, 1904 issue of Th Oho Architect and Builder had this item which might have been about the house that became the Virginia Theatre: