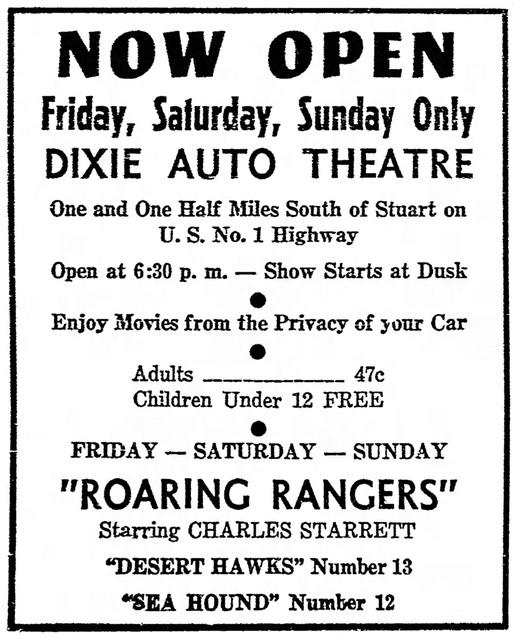 The Dixie Auto Theatre opened on May 26, 1951, with free admission and screening the 1948 comedy drama “Mickey” with Lois Butler and Bill Goodwin. It was opened by Leonard Creech of Stuart who is the owner of the Dixie Grove Fruit Stand on Federal Highway. The location was just three-quarters of a mile from the Stuart city limits. Creech saw a golden opportunity to take advantage of a national obsession. He had owned an outdoor drive-in theater in Dayton, Ohio, (unverified at this time) and felt he could make a success with one in Stuart. He secured property across the highway from the fruit stand and construction began. There would be parking slots for 250 cars and a 14-by-16-foot screen, which could be lowered in the advent of a storm. A speaker system (blast speakers) was installed and a projection room was built below ground, 90 feet away from the screen.

The Dixie Auto Theatre closed down for renovations and improvements in November 1951 when it was taken over by the Talgar Theatre Company chain. It reopened on Friday, February 29, 1952, with a larger screen and plantings at the perimeter to block lights from passing cars. The feature film that night was 1944 adventure “Cobra Woman” with Stuart’s ‘movie star’ Jon Hall. In July of 1953, in-a-car speakers were installed replacing the blast speakers. On June 12, 1953, Stuart Drive-In Theatre opened on NW Britt Road. That was the beginning of the end for the Dixie Auto Theatre. The Stuart Drive-In was a non-segregated theatre, it was the place to go. The Dixie Auto was gone by 1954.

Note: It was located on U.S. 1 but I don’t know where. I do have a good idea where but I have no aerial photos to prove the location. It was advertised as ¾ mile south of the city limits.