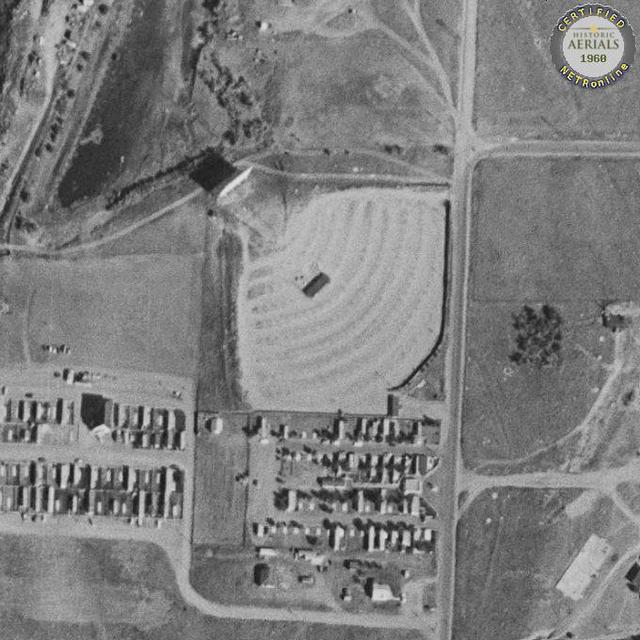 The Motion Picture Almanac also listed the Northside Drive-In, capacity 350, through its final appearance in the 1965 edition. By the 1969 aerial photo, the screen was down though the ramp area was undeveloped.

Based on a note in the July 22, 1950 issue of BoxOffice, that was its first year. It reported that the “North Side” recently opened one block away from the greyhound track. The note said the drive-in could hold 400 cars. It was closed at the end of the 1961 season.

Nothing remains of the Northside Drive-In today; mobile home parks occupy the site.

Cy Lee and Paul Rothman built the Northside. In a May 13, 1950 note in Boxoffice, it was supposed to open with a week.

By the end of the year, Rothman had leased the Northside to D. C. Trester, effective Spring 1951. Then in June 1951, W. L. “Lloyd” Perry leased it from Rothman.

In January 1952, Kelso and Lem Lee bought a piece of the Northside and Starlight drive-ins from Rothman, then they completed the purchase just before they opened for the 1952 season in April. Lem Lee promised to add 350 seats for an indoor theater that fall.

In December 1954, Westland Theatres bought the Starlight and Northside from Lee Theatres. Westland continued to own the Northside as it advertised in 1960 newspapers, but by 1962, it had ceased advertising.

The Northside held its Gala Opening on Friday, May 26, 1950. Its opening program was “Tycoon” starring John Wayne and “Mighty Joe Young” plus “Always a Color Cartoon”. It advertised “Picnic tables for those who want to eat their picnic dinner and see the show” along with a “New Cafeteria Type Snack Bar.”