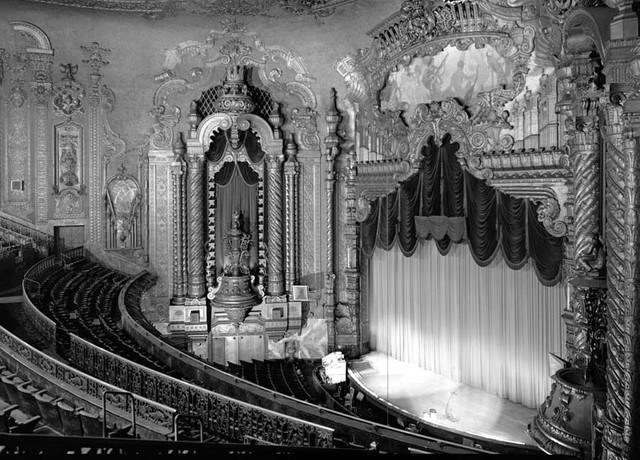 The Fox Theatre was once a centerpiece of Downtown Brooklyn. It was opened by William Fox on August 31, 1928 with Janet Gaynor in “Street Angel” a silent film, and a stage show named “Carnival des Naples”. It had 4,305 seats. Interior decorations were in a mix of Spanish Baroque, with Marine motifs. The proscenium was 50ft wide, the stage 39ft deep. It was equipped with a Wurlitzer ‘Crawford Special’; 4 manual 37 ranks organ, which also had a slave console. By 1937 it had been taken over by Fabian Theatres and renamed Fabian Fox Theatre.

The Fox Theatre closed as a movie palace on February 6, 1966 with William Bendix in “Johnny Nobody” and David Niven in “Where the Spies Are”. It became a popular concert venue for rock ‘n’ roll shows emceed by Murray Kaufman (Murray The “K”) which lasted until April 1968. Later in 1968 it was briefly taken over by the Salmaggi Grand Opera Company. It was ‘Temporarily Closed’ for two years, then a “Farewell to the Fox” week of organ concerts were held from October 31, 1970 until November 4, 1970, with Bill Gage playing the mighty Wurlitzer.

Demolition began on November 7, 1970 and was completed in January-1971. The Consolidated Edison company of New York was built in its place.

Yeah it is a great site. I used to go there more but it is pretty extensive with the pictures and all.

I have a promo album of Murray the K doing an Easter or holiday show from the Fox. Gene Pitney and a number of other great early rock stars are featured.

Click here for an exterior view of the Fox Theatre in 1929.

Excellent thanks for that link!

This obit is from 2010. But is has a photo of house organist Rosa Rio at the organ. Copy & paste to view.

There was a card(lobby card?) Frame(holder) seen on an episode of American Pickers(and some theatre seats too, possibly from the Fox Theatre too?). They brought the card holder, but not the theatre seats.

That episode of “American pickers” was called ‘A Banner pick"(i think?). Billy from 'Baggage battles" was in the epsode too.

I remember going to the FOX for the. Rock & Roll shows and the last film I saw there was Damn Yankees in 1959. Going to down town Brooklyn to see a film was a big deal.Back in the 50’s besides the FOX you had the Brooklyn Paramount, the Albee and Lowes Metropolitan. These theaters got the first run films after they played in New York City. After the runs there the films played the local neighborhood theaters.