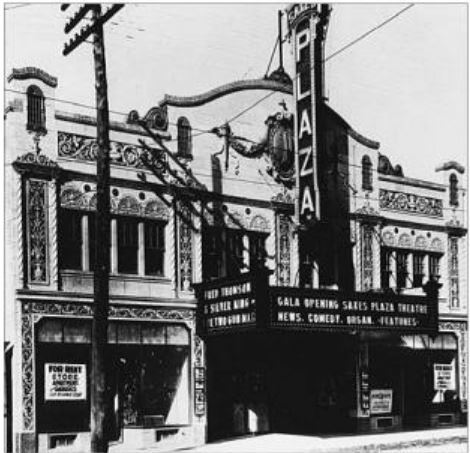 Not all movie palaces were grand affairs, as the name implies, but were merely show houses built in that era, and Milwaukee’s PLAZA (Spanish for ‘public square’ or ‘courtyard’) was one of these. By 1927, the local Saxe chain of movie houses included some of the finest in the city, such as the WISCONSIN, ORIENTAL, COLONIAL, and TOWER, but they had not yet established a significant foothold on the south side of the city, but that was achieved when they opened the Plaza at 3067 South 13th Street. The neighborhood was then a heavily Polish area almost on Oklahoma Avenue, then the city’s southern boundary and at the terminus of the street car line. There were no major show houses in the vicinity and the Saxe chain could expect a largely captive audience in the days long before television. It is strange then, that they built a throwback to the previous era of the ‘photoplay parlors’ of the previous decade.

Prior to the Plaza, the Saxe Amusement Enterprises usually dealt with major theatre architects such as Rapp & Rapp of Chicago, or Dick & Bauer of Milwaukee, but for the Plaza they chose a local man, Arthur Kienappel, an architect of just one other show house in Milwaukee: the GREENFIELD, a modest 500-seater built in 1913, but also on the south side. He showed no real artistry in that theatre, but perhaps it was his spare design (and lower fees) which attracted the Saxe company to retain him. It could well have been that the Saxe company was overextended financially having built four theatres in the past two years, and so economy became the watchword in this locale of lesser competition. Historically, most cities have a ‘prime’ orientation, and Milwaukee’s was to its north side, north of the Menomonee river valley which then divided the city north to south, and so it was there that the major movie business was considered to be, and there is where the greatest funds were spent for competing theatres.

The major expense of the 1300-seat Plaza was clearly its wonderful polychrome terra cotta facade! Its 2-½ stories were clothed in a splendid display of repeated neoclassic design elements, while the remainder of the building’s walls were simple Cream City brick (an old nickname for Milwaukee’s distinctive home made bricks). The bright cream color of the bricks made from a local clay deposit now long gone gave the city this appellation, not any connection with the dairy industry. It turned out that the softness of this brick in an era of black smoke from coal heating, turned the bright color dark with soot over the years, so now it is difficult to appreciate what a cache it was to have some of this unique color in that day and age, for it is true that amounts of this reclaimed brick when now available, still command high prices on the building market.

The Plaza was about 150-feet deep, by 50-feet wide, so there was room on the front for two small stores plus the four doors of the theatre’s entry flanking the island box office in a recess adjacent to the sidewalk line. The ground floor storefronts were framed in the first examples of the fine terra cotta in a rinceau of acanthus leaves. The decoration continued to the second floor where 14 double hung windows are flanked by trophy panels and topped by demilunes and paterae, while the half-story-high parapet is gently raised with an arched center, the face of which is developed with a cartouche framed by fruit festoons and torches. Of course, the center of the cabochon of the cartouche features a capitol letter ‘P’ in a graceful serifed style. The flanking panels of the parapet are faced in horizontal panels of buff terra cotta ornament in classical motifs against dark grounds. The higher portion of the center of the parapet is really concealing the steel superstructure needed to support the upper half of the vertical name sign reading: “Saxe’s PLAZA”. A nice little detail is the elaborate turnbuckles of the suspending rods of the marquee, which are clothed in iron scrolls. The terra cotta continues in the form of ceramic wall tiles covering all of the walls, and floor of the recess and the box office, but the upright cornice of anthemions atop the box office is of traditional brass.

The lobby was a modest affair with a 15-foot-long niche for the concessions which were merely a line of shelves and freezer boxes for ice cream bars in the 1940s. From here one went through one of the three sets of double doors directly into the auditorium, and the sight would have very much surprised one accustomed to the grandiose movie palaces then all the rage. The vista here was of a very long tunnel some 50-feet wide, by almost 100-feet long, with a low ceiling perhaps only 30-feet high, there being no balcony. It was a slightly enriched box beams-and-pilasters decor reminiscent of ten years previous. There were no chandeliers, no soaring domes, no sweeping draperies and no fancy carpeting. The two banks of wooden seats covered in black leather sat in a hall with only some modest cornices atop each of the stucco wall panels between the pilasters, and from these issued a glow from the hidden cove lights in them. That glow unintentionally revealed 3ft.x 2ft. ventilator grilles from the central heating and air cooling (not air conditioning) system. It also revealed the stenciled box beams painted a light color that ran from the capital of one pilaster to its mate on the opposite wall. A wainscot topped by a triple chair rail covers the bottom third of the walls. The pilasters are faced with small electric torches that provided a feeble light.

One would expect the stage to be the focal point in the room, but it was hardly that. The proscenium arch was a hard rectangle of plain white lines which touched the ceiling, and the ‘grand drapery’ within the arch was anything but, being only seven small Austrian folds separated by galloons, and having truncated legs at the sides. The ‘house curtain’ was a check patterned fabric on a traveler line, though there was a very modest stage house that could have suspended traditional flown draperies, though such would have cost more to be motorized or operated by hand. A single fire exit on the north wall was the occasion for the lone cross aisle mid way down, and diminutive spiraled columns flanked the doorway. One could not get over the fact that this was supposed to part of the vainglorious trappings of the Saxe ‘empire,’ but here it was in all its uninspiring, and barely Hispanic, simplicity. Indeed, the lone significant plaster ornament in the room was the line of blind mini-arches of Gothic inspiration that underlie each of the cornices. The fact that there was a 2 manual Marr & Colton pipe organ may have been overlooked what with the sound emanating from only two small grilles above the stage wall exit doors flanking the stage on the west end.

As the Saxe organization disappeared with the advent of the Great Depression, so did the Plaza in 1957 at a time when the public found television more to their liking. The city was larger then, and its boundary had moved farther south, and there were many other things to do of a night than go to even a modest neighborhood show house. Cars became common after the Second World War, and Americans would go nowhere without their cars, and movie houses without parking lots faced a difficult time of it. Some movie palaces merely died a slow death as abandoned hulks awaiting condemnation, but for the Plaza it was a more dignified end as a supermarket chain bought it and surrounding land for its new store and parking lot, the then-new sign of the day and age, as the movie palaces had been forty years before. Today the supermarket is bust and vacant just like the Plaza of so many years ago, as the now-Hispanic neighborhood may wish it had a namesake showhouse.

The Plaza was operated by Fox Wisconsin Amusement for many years and for its last years it was an independent. When it closed there was an attempt to remodel the Plaza into a supermarket but halfway through the construction the developer changed its mind and the Plaza was demolished. A new supermarket was built and the Plaza’s site became the parking lot for the supermarket.

oldest ad for this theater is at View link from July 9, 1928