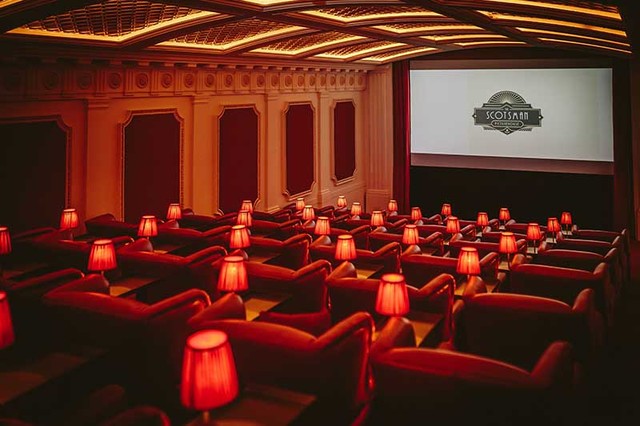 In Edinburgh, in the 1900’s, the North Bridge running between the New and Old Towns was widened. As part of this expansion a 190ft high tower was built, into which The Scotsman newspaper moved their offices. The building cost around £500,000 and, after the rest of the North Bridge extension was completed, it formed an imposing entrance to the Old Town.

In 2001 the newspaper moved to purpose-built offices in Holyrood. The building was renovated into The Scotsman Hotel. It was purchased by Sheikh M.B.I Al Jaber for £63 million in 2006, but went into liquidation in June 2016.

It was sold to the G1 Group for an undisclosed amount in February 2017. A multi-million pound refurbishment was carried out, during which the Scotsman Picturehouse was constructed in a disused room. The boutique cinema features ornate Edwardian cornice-work, wood panelling and bespoke red leather and velvet armchairs and sofas, each lit by a table lamp.

The Picturehouse opened on Friday 9th August 2019 with the Elton John biopic “Rocketman” followed (in a separate show) by musical fantasy “Yesterday” featuring music by The Beatles. The intention is to screen classic masterpieces, latest releases, modern cult favourites and curated cultural content such as ballets and operas. Patrons are able to purchase tickets in conjunction with menus available at the hotel’s Grand Cafe.