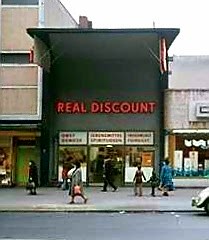 Located in the Neukolln district to the south of the city. The Aki Aktualitaten Kino Neukolln was built on the site of the Schauburg Kino which had been destroyed in 1943. (this has its own page on Cinema Treasures).

The Aki was built and opened in 1953, the 2nd Aki to be opened in Berlin. It was designed by architects Joachim Schweitzer & Bartels in a Modernistic style. It was operated by Dr. Bernhard Frank Aki Aktuatitatenkino AG as part of their newsreel cinemas chain. It screened non-stop newsreels, short documentary films and cartoons. The running time for one show was 50 minutes. The FP 5 Projectors and the sound system were by Pillips. In 1956 CinemaScope was added.

The cinema was closed in 1967. It was converted into a supermarket which was still open in 1995. In 2019 a new building stands on the site which houses shops and offices.