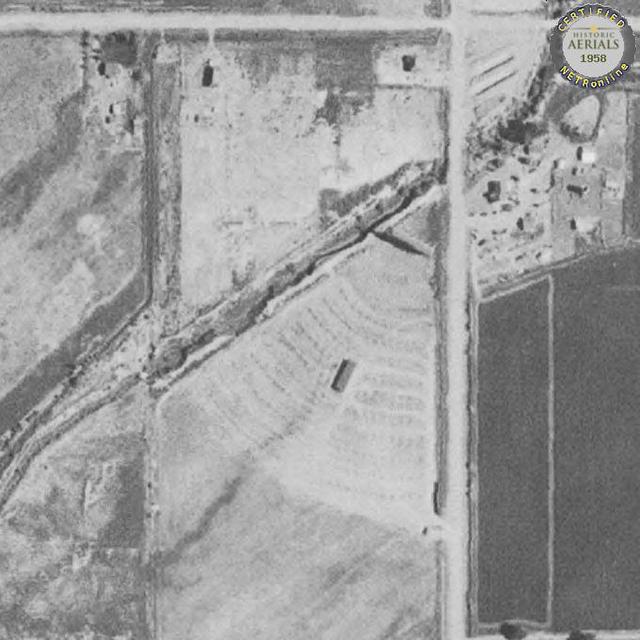 The Monument Drive-In first advertised in the Daily Sentinel of Grand Junction on June 15, 1957. Its program that night was Joel McCrea in “Wichita” and the Bowery Boys in “High Society”. It was owned and operated by Guy Carlucci Jr. & A.B. Moore The drive-in continued to advertise only through to September 1958.

The 1960 Motion Picture Almanac listed the Monument Drive-In as owned by Moore and Carlucci.

By May 1963, the Daily Sentinel referred to it as “the site of the old Monument Drive-In Theater.”

Grand Junction’s Daily Sentinel wrote on Nov. 15, 1956, “A new drive-in theater, with the largest screen on the Western Slope, is to be constructed one-half mile west of the city limits on Highway 50. Guy Carlucci Jr., of Fruita, and A. B. Moore of Colorado Springs, are partners in the new enterprise. Estimated cost of the installation will be $40,000 to $45,000. Parking space will be provided for 400 cars. The screen, 97 feet wide by 57 feet high, will accommodate wide screen pictures.”

During the two summers the Monument was open, Grand Junction had twice as many active drive-ins (four) as indoor theaters.

In a Dec. 12, 1976 retrospective, the local Daily Sentinel wrote, “West of Grand Junction on 23 Road, just off Highway 6-50, the Monument Drive-In opened in June of 1957. This theatre did not do well, perhaps because of its location, and closed early that season. In mid-1958, it opened under new management.”

That story on Grand Junction’s drive-ins got most details right, but not everything. In 1957, the Monument continued to advertise into October, closing a little earlier than the other three in town but not what I’d call “early.”

A June 5, 1958 note in the Daily Sentinel read, “Monument Theatre / Opens tonight showing Safari and Battle Stations also Cartoon. Under new management. Box office and Snack Bar open 7:15 nightly.” Its ad returned the next day, and it included the line “Under New Management”.

After July 30, the ads took a break for almost two weeks. When the Monument ad returned Aug. 9, it started with “Now open / Improved light and projection”. The last ad I could find for the Monument was Sept. 15, 1958.