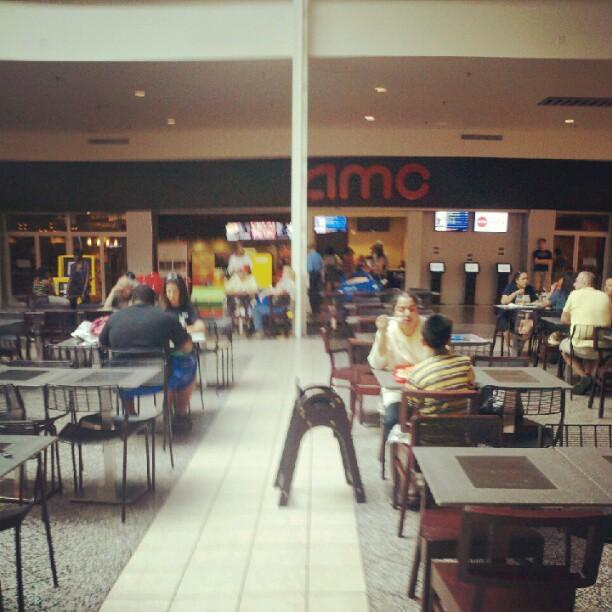 No, this is one of the rare locations that didn’t get remodeled into that style. The carpeting has the same style that the Esquire had (sea green/blue). The auditoriums now have blue drapes on the walls. Before 2003, it had red/gold drapes. Wild guess here, that style may have dated back to Essaness. The two sets of concession stands and lobby colors are pink/light red (the lighting scheme makes it pink). And this also has the honor of being one of those rare 80’s cinemas with multiple bathrooms. There’s a set of bathrooms right after you buy your tickets, one right near the entrance to auditorium #4 (or is it #3?), and one by #1. Nice theater, but my only problem is the screens. #5 is the largest, with nearly 500 seats. Yet you can tell that #5 and #6 used to be one large and wide screen, Possibly the one that ran 70MM. My guess is CO split it in ‘94.

On another note, Kerasotes is opening the Showplace 14 nearby at 71st & Harlem. I hope CR will still hold it’s own.

The theatre was opened by F&F Enterprises (Golf Mill 1-2-3), who later merged their operations with Essaness. Cineplex Odeon took over the theatre when they acquired the Chicago-area Essaness locations in 1986.

Photo of the sign for the theatre as well as the grand opening ad posted in the photo section. Will someone get in that mall and get the theatre entrance? An phone picture will be OK.

Last Friday, I attended a screening of “The Dark Knight Rises” at the new and improved AMC Chicago Ridge Theatres. The complex has done extensive renovations to the lobby and theatres. Each theater is equipped with new screens and seats (recliners for each moviegoer!). In the re-designed lobby, a full bar and lounge area has been added for patrons who wish to “brew & view”. Praises to AMC for finally upgrading this 31 year-old complex and providing a great theater experience located in one of the best malls in the Chicagoland area.

I would love to see pics of the interior of the theater. Even it’s entrance in the mall.

July 1st, 1988 grand opening in photo section. They also had trouble with construction

From the photos, wow, the C-O logo lasted until at least 2009 (based upon “17 Again’s” release date! Is that logo stil there?

It seems a lot of folks think this theater opened July 1, 1988. This is not correct. That date is the opening for the Commons Cinema across the street (99th St.) from the main Mall. The Chicago Ridge Mall Theatre was in business earlier in the 80’s. I have added in the photo section a ad showing what was playing at the theater in 1986. The theater was open earlier. I believe some of the confusion is because it became a AMC Theatre in ‘88. Same theater, different name.

I found something in the newspapers suggesting it opened 7/31/1981.