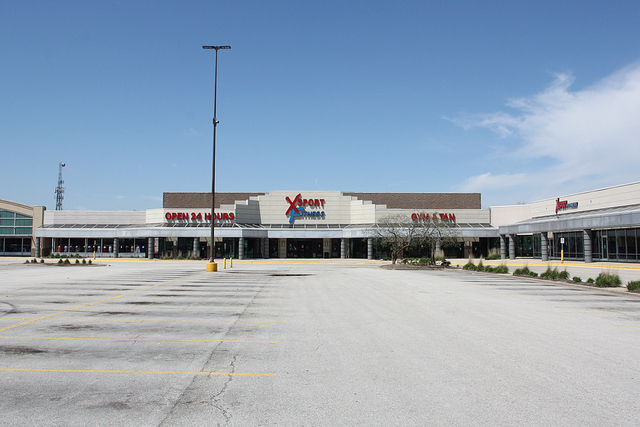 This cinema opened June 24, 1988. Located just south of the Chicago Ridge Mall Cinemas. The theater closed in 2001 due to bankruptcy issues with Cineplex Odeon. The building now houses a health club.

The Chicago Ridge commons Cinemas was converted in to a fitness gym that is opened 24hr`s a day. Thay kept the front but a far as i know nothing on the in side. Their was a big infomation booth set up in the main mall. To get people to join.

I wonder if this place was so short-lived because of its close proximity to Chicago Ridge 6. And did people constantly get the two confused?

It closed because of the bankruptcy of Loews-Cineplex. During the 99-01 period, they started getting rid of locations they felt really didn’t need. In this case, CR would be fine with the 6 screens in the mall. Same with what they did with River Run. Since they had 10 screens at River Oaks, they could afford to lose RR.

Chicago Ridge Mall and the Commons strip mall are actually seperated by 99th street. CR mall streches from 95th to 99th. If Commons Cinemas were still open, one could exit the mall at Carson’s, cross the street (99th), enter the Commons parking lot and go right. You couldn’t miss the theaters (now X-port Fitness).

Interesting coincidence: This location had to delay its grand opening by a week due to not passing a pre-opening fire department inspection. “Who Framed Roger Rabbit” was supposed to open, and had to be moved literally at the last minute across the street to the Chicago Ridge. (Chicago Ridge missed its opening day by a week, as well.)

June 24th, 1988 grand opening ad can be found in the photo section.