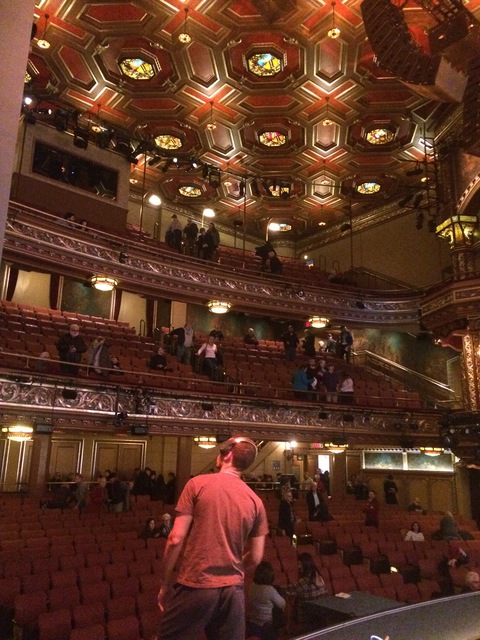 The Stuyvesant Theatre was opened on October 16, 1907 with a play “A Grand Army Man” written by David Belasco. The theatre was built for and operated by producer, director, playwright David Belasco. On September 3, 1910 it was renamed Belasco Theatre when the original Belasco Theatre on W. 42nd Street reverted back to its original name of Republic Theatre (now New Victory Theatre). The Belasco Theatre 3-level auditorium has seating provided in orchestra, mezzanine and balcony. The auditorium walls have rich walnut paneling, ornamental Tiffany lamps and 18 mural panels painted by Everett Shinn. There is a huge elevator stage and above the auditorium was Belasco’s 10-room duplex apartment.

Although it had its fair share of ‘flops’, there were some notable hits along the way: The musical “Hit the Deck” opened on April 25, 1927, Humphrey Bogart in “The Wise Child” on August 6, 1928 and “Tonight or Never” starring Melvyn Douglas opened on November 18, 1930, which was the last production under David Belasco. He died on May 14, 1931.

Katherine Cornell took over the lease followed by Mrs Hazel Rice until late-1934 when it was taken over by The Group Theatre. On October 28, 1935 “Dead End” was an immediate hit and was followed by “Golden Boy”. Other plays were “Johnny Belinda”, “Trio” (a play about lesbianism), Judy Holiday & Richard Widmark in “Kiss Them For Me” on March 20, 1945, Martita Hunt & Estelle Winwood in “The Madwoman of Chaillot” on December 27, 1948 ran for 368 performances.

In 1948 it was purchased by the Shubert Brothers and in 1949 they leased the Belasco Theatre to NBC and it became a NBC Radio Theatre. It returned to legitimate use on November 5, 1953 when the hit comedy “The Solid Gold Cadillac” was followed on October 13, 1955 with Jayne Mansfield in “Will Success Spoil Rock Hunter?”. The next hit was Lilian Gish in “All the Way Home” from November 30, 1960. Two productions from London, UK’s West End then hit the stage: Nicol Williamson in “Inadmissable Evidence” followed by the original London cast headed by Beryl Reid in “The Killing of Sister George” which ran for 205 performances. From February 26, 1971 the Off Broadway musical “Oh! Calcutta!” caused a sensation on its long run, ending on August 12, 1972 (1,314 performances). The theatre was then used by the Shubert Organisation as a moveover house for hit shows, which included the musical “Ain’t Misbehavin'. "The Rocky Horror Show” had a short run here, before it became a cult hit.

In 1987 the Belasco Theatre was given Landmark designation by the New York Landmarks Preservation Commision which cited both the exterior & interior of the theatre. The theatre was renovated in 2010.

In October 2019 it was announced that the Belasco Theatre would be leased to Netflix for a month from November 1 to December 1, to showcase the new Martin Scorsese movie “The Irishman” starring Robert De Niro, Al Pacino & Joe Pesci. The movie had premiered on September 27, 2019 as part of the New York Film Festival. For the movie, Netflix installed a projection booth at the rear of the orchestra seating, an 18x32ft wide screen, and surround sound on all three levels of the auditorium.

According to the Sunday NY Times, the next Netflix film (“ATLANTICS”) will open at MOMA.

Al, there are actually some comfortable seats in Broadway theaters. The worst, however, is the second balcony in the St. James meant for people with small legs.

Thanks to Netflix for bringing glamour back to moviegoing by reopening the Paris Theatre for “Marriage Story” and for showcasing the 3.5 hour all star epic, thriller movie “The Irishman” at the beautiful Belasco Theatre! After having enjoyed “Marriage Story” earlier in the week at the Paris, yesterday at the 1 PM matinee, I enjoyed “The Irishman” at the Belasco. The red curtain rose and 2 trailers played of Netflix movies: “Marriage Story” and “The Two Popes” followed by the movie (which has no intermission). I sat in the second row (B) of the Mezzanine, which provided a perfect sightline for the large screen, with excellent 4k projection. The 7.1 surround sound was very good, too. The Belasco is gorgeous, with murals, Tiffany light fixtures, and plenty of ornamentation. The experience was like how people used to see movies, except that over time, the original grandeur of most movie palaces had faded, whereas the Belasco was properly restored in 2010.

I quickly glimpsed at the lower lounge concession area. It looked like the same refreshments that theaters offer at live shows. There was no popcorn.

Queens' Museum of Moving Image will be showing free On Monday eves, Dec 2, 9, 16, 23, Raging Bull, Goodfellas (35mm), Casino (35mm), The Irishman, presented by Netflix. Those who are not museum members can take their chance at the screening of getting a ticket. (incentive to join).

I should add those 4 films features four of Martin Scorsese’s masterworks, all edited by Thelma Schoonmaker, and starring Oscar winners Robert De Niro and Joe Pesci.

Goodfellas and Casino were on a double bill (both 35mm) earlier this month at the Castro (SF). I had not seen Casino since it came out in the 90’s – highly recommend.