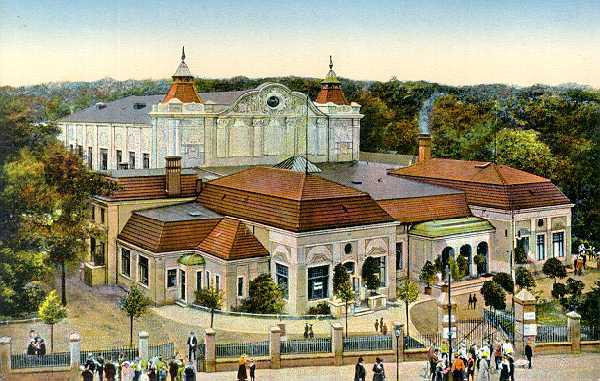 Located on the northen edge of the Neukolln district to the southeast of the city, on the southern border with the Kreuzberg district. The Neue Welt (New World) was a huge pub & biergarden which opened in 1867 and was operated by C. Kelch. In 1880 the Neue Welt was operated by Rudolph Sternecker. A ballroom was built in 1902 which could seat 3,000 and in 1910 a second smaller ballroom with 1,500-seats was built. Adolph Hitler spoke here in 1930. In 1943 the Neue Welt was destroyed by Allied bombs during Wold War II.

In 1955 the management of the Filmtheater im Wintergarten changed and the cinema was closed. The stage continued to be used for live acts and concerts. The building is listed as a monument and was later re-named Huxley’s Neue Welt, which continues in 2019.

A third Wintergarten Das Variete opened in 1992 at the old Cinema Biophon Theater Litchspiele BTL in the Tiergarten district at Potsdammer Strasse 96. (It has its own page on Cinema Treasures)