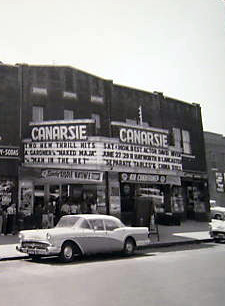 This was a theater in Canarsie, Brooklyn on Avenue L at E 95th Street. The Canarsie Theatre opened on October 11, 1927 with 1,470 seats. It was triplexed in March 1980. I recall they used to have normal hours, then reverted to odd ones. I remember “Purple Rain” and “All of Me” playing here in the 1980’s. Very cramped as I recall.

It closed in 2004. There were plans to turn the former theater into a banquet hall, which never materialized.

I drove on Ave L about 6 months ago and stopped at Originals for pizza .

I was born in canarsie and my earliest recollection was the picture Gone With the Wind in 1939 when i was 9 years old.My mom had taken me and i was thrilled to see a movie in color.I think every kid waited for Saturday to go to the Canarsie theater and see two pictures,news of the day,cartoons,and mostly for the chapter,which ran for ten or more episodes.Each week it would pick up where it left off.God forbid you missed a week!As some of the people stated here the price was cheap,and i remember paying a dime to get in.If you were lucky and had an extra nickle get a candy bar or a drink.Times were bad in the early 40’s and the dime was hard to come by.Many times i took flyers for upcoming movies and delivered them to homes in the neighbor hood mail boxes for the manager of the canarsie theater,and received two free tickets. As kids growing up in canarsie that was our pride and joy,the Canarsie theater.Wasn’t much else we had. I still have fond memories of Canarsie,and that Movie theater.Broke my heart to hear its gone.

I was 8 years old when we moved to Canarsie in 1962, and lived on E. 92nd St. just off Ave L. I remember my first time at the Canarsie Theater fondly. It was a Saturday, and my Mom sent my brother and I to the matinee for the afternoon. A Frank Sinatra rat-pack western and another western were playing. My brother and I liked it so much that we just stayed in the theater, watching the same two flicks over and over again, and didn’t leave until about 9:00 that night. Needless to say, Mom and Dad were highly pissed. We paid the price, and were grounded for a long time. I had many a good time at that old hall over the years, and miss it’s old-time grandness dearly. I guess it’s kiss of death was when it went multiplex.

Mike, your fond memories got me to think of the time I overstayed my visit to the old Greenpoint RKO and had to be rudely picked up by my father at about 10:30 PM. I was about 10 at the time. The picture that captured my attention was Disney’s “The Swiss Family Robinson”.

While I was not officially grounded, it was quite a while before my parents let me visit a movie house alone.

Was there ever a Canarsie Theatre on Rockaway Ave?

Years back, my kids went to a dance studio on the block. Never went in, and by then it was already a triplex. Was it privately owned or ever under one of the chains such s Randforce?

I was fortunate enough to live across the street while the theater was still in operation in 1999 with it’s unique look. After moving out and returned for a drive through the old neighborhood, I cried. 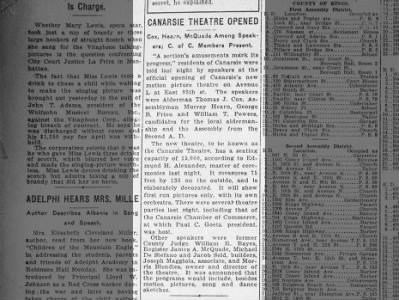 The place must have been enormous if it seated 15,000.