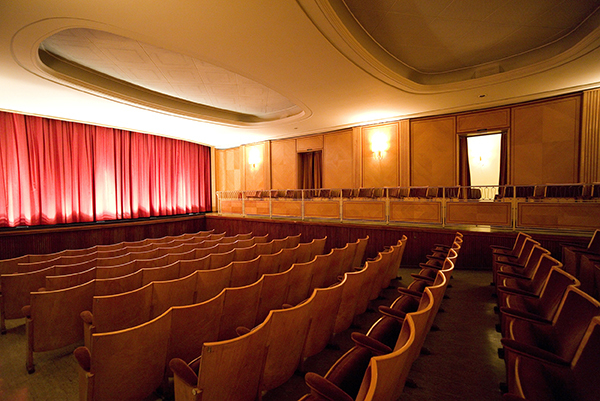 Located in the Altstadt-Lehel district of the city centre. The Film-Cabinet cinema was opened on 13th August 1956 and was operated by Hans Luttner. The FP 5 projectors were by Phillips. In 1958 Walter & Marlies Kirchner took over and it became an art house cinema. Walter Kirchner (1923-2009) founded and operated his own distribution company named Walter Kirchner (also known as Lupe Filmverleih). He distributed movies from directors such as: Buster Keaton, Sergej M. Eisenstein, Disga Vertov, Ernst Lubitsch, Alfred Hitchcock, Michelangelo Antonioni, Ingmar Bergman, Luis Brunuel, Fredrico Fellini, Jean Marie Straub & Danielle Hullet. The interior and style of the cinema has not been changed since its opening in 1956 and it is still operated by Marlies Kirchner (Leisenhoff). It is a member of the Europa Cinemas Group of art house cinemas.