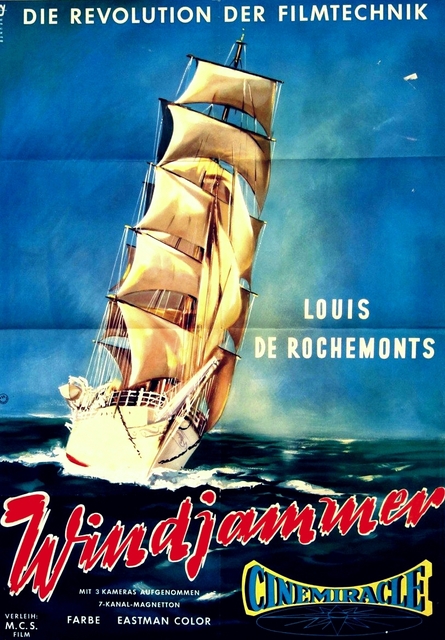 Located in the Ludwigvorstadt-Isarvorstadt district in the city centre. The Royal Palast was opened with 2-screens in 1957. It was designed by architects Sep Ruf & Heingoldstein. The screens had 826 & 505 seats. It was operated by Rudolph Engelberth Union Filmtheater GmbH. There was a large foyer. The seats were by Loeffler. The cinema was equipped with DP 70 TODD-AO projectors by Phillips (also known as Norelco) for 35mm & 70mm film and 6-channel stereophonic sound. The screen had the TODD-AO curve and the first TODD-AO film to be screened was Gordon McCrea in “Oklahoma!”, directed by Fred Zinneman which opened on 14th June 1957. Later the Royal Palast had the first 3-strip Cinemiracle process installation in Germany. The sound system was enlarged to 7 channels for Cinemiracle. The first (and only) film in Cinemiracle was “Windjammer-The Voyage of the Christian Radich” which was directed by Louis de Rochemont & Bill Colleran. It premiered on 22nd July 1958 at the Royal Palast. (the Capitol Theater in Berlin was the first 3-strip Cinerama theatre in Germany, with a huge deeply curved screen. It has its own page on Cinema Treasures, named Schaubuhne).

“Ben Hur” starring Charlton Heston and directed by William Wyler premiered at the Royal Palast on 14th October 1960. The movie was shot in the Camera 65 system, a single strip Cinerama type proscess, also known as Ulta Panovision 70mm. (Many years later the same process was used to shoot and present “The Hateful 8” directed by Quentin Tarantino.

In 1977 the two screens were split into 5-screens. In 1992 the auditoriums were demolished and a new 5-screen Royal Palast was built on the site which has its own page on Cinema Treasures.