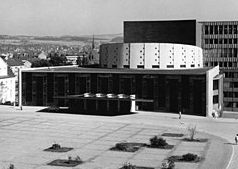 Built on the site of a previous State Theater (1909-1943) which was destroyed by Allied bombs during World War II. It was rebuilt to the plans of local Kassel based architect Paul Bode and Ernst Bruning, opening in 1959 with two auditoriums seating 953 & 540. In 1989 a small studio theatre with 99-seats was built.