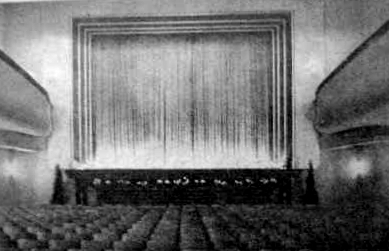 Located in front of the main Railway Station in the city centre. The Palast Theater was built and opened in 1948 on the site of the Palast Lichtspiele !922-1941) which had been destroyed by Allied bombs during World War II (It has its own page on Cinema Treasures). The Palast Theater was operated by Palast Theater KG Friedrich Mehmel. The cinema had a capacity of 930-seats in orchestra and balcony levels. In front of the screen was a stage (size 10x4.5x7.2 metres). In 1956 CinemaScope was installed, together with a 4-channel stereophonic sound system. The CinemaScope screen measured 11x4.5 metres. The E X projectors were by Ernemann. A second screen named Princess with 47-seats was added, the architect was Alfred Goetsch.

In 1981 it was taken over by the Ufa chain operated by Heinz Riech and in 1984 it was multiplexed into 12-screens and renamed Palast Kino Centre. It was closed in 2003 and was converted into an Apple electronics store.